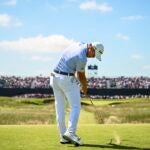 To tame an Open Championship layout, one typcially needs a special set of tools. For the average pro, that might mean adding a utility iron to flight it under the wind, or lead tape to the putter head for the slower-than-normal greens.

And then there’s the next-level changes that, outside of maybe Tiger Woods, literally no one in the field at Royal St. George’s would’ve considered — except Collin Morikawa.

The 24-year-old is the closest thing to a human Iron Byron, possessing a freakish combination of precision and attention to detail that’s almost unmatched in the sport. If that feels like a stretch, just remember it was Morikawa who went through a testing combine during his time at the University of California that revealed his dispersion pattern with a 6-iron was comparable to other elite golfers with a pitching wedge.

When Morikawa feels as if something is amiss with his gear, he normally isn’t overthinking the situation.

It’s because of his attention to detail that Morikawa switched out the 7- through 9-iron in his bag from TaylorMade’s P730 to P7MC — a cavity-back model he already uses in the 5- and 6-iron — following extensive testing at Royal St. George’s. The change just happened to coincide with a ball-striking clinic during the second round of the Open Championship that vaulted Morikawa into contention heading into the weekend.

“I changed to the [TaylorMade P7MCs] strictly because I couldn’t find the center of the face,” Morikawa said bluntly after shooting 64. “I was hitting these iron shots last week that I just normally don’t and my swing felt good, but it was a huge learning opportunity.

“Last week I wanted to win, but I came out of it learning a lot more, and thankfully it helped for this week.”

With a player of Morikawa’s pedigree, there’s more to an iron change than simply finding the center of the face with more consistency. Following a medicore week at the Scottish Open, Morikawa reached out to TaylorMade Tour rep Adrian Rietveld to see if they could have a meeting of the minds to rectify the situation.

“As the question came through to me from Collin, I didn’t even answer straight away,” Rietveld told GOLF.com. “I just told him I needed to think about it. He’s just that type of guy that nothing is going to change unless there’s an out-and-out reason to change, and he just felt as if he was mis-hitting his irons. But he couldn’t understand why.

“He’s the ultimate ball-striker who hits a lot of shots. So to be marginally off, you’re affecting launch and spin on every shot, so he just couldn’t be as precise as he wanted to be.”

Working his way through Morikawa’s bag, Rietveld landed on the break point in the combo set where the 2020 PGA winner transitions from a P7MC 6-iron into a P730 7-iron.

Morikawa confirmed he hit the 6-iron well but wasn’t sure if it was in his head. What Morikawa didn’t realize was there’s a marginal difference in the sole geometry between P7MC and P730. While they both share a compact profile and sole width that’s on the thinner side, the P7MC features a sharper leading edge than the P730, with marginally less bounce.

“The soles are similar, but a little less sole relief and bounce in the P7MC made me believe a head-to-head test between the MC and the P730 was necessary to see if anything was there,” Rietveld said.

Monday morning, Rietveld and Morikawa took to the range to conduct the testing. Right away, Rietveld noticed something was different about Morikawa’s strike with the P730 mid and short irons.

“It was interesting, as he was warming up, the sound off P730 was not Collin-like,” Rietveld said. “It’s unique to say this, but it was just fractionally different to what I’m used to hearing. Then he goes into the MC and you can hear the strike come back.”

The slight change in sole geometry was helping Morikawa strike the ball fractionally better with improved turf interaction. What pro and Tour rep also learned was that the firm turf conditions in England were also causing Morikawa to launch his P730s fractionally lower than what he was used to seeing back home in the States. The opposite result played out with P7MC during testing, where Morikawa saw a fractionally higher launch than he was used to seeing back home.

The higher launch was a welcomed sight for Morikawa, who was forced to account for an extra 3 to 4 yards on draw shots the previous week in Scotland becasue of the way his mid and short irons were interacting with the turf.

For at least the first two days at the Open Championship, Morikawa has found his groove with arguably the most potent weapon in his bag.

“If [Collin] was a superhero and he had super powers, his would be pin high,” Rietveld said. “It’s phenomenal at how good he is at controlling that pin-high number. But to do that, you need to have consistent spin numbers. He’s certainly there right now.”

Want to overhaul your bag for 2021? Find a fitting location near you at GOLF’s affiliate company True Spec Golf. For more on the latest gear news and information, check out our latest Fully Equipped podcast.