Wall-to-Wall Equipment: Jon Rahm departed the Memorial with an invaluable piece of gear 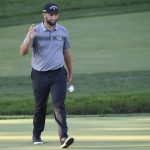 Jon Rahm had a red-hot putter at the Memorial.

A positive Covid-19 test cut Jon Rahm’s week short at the Memorial, which is a shame considering the putting performance he put on during the third round with an Odyssey White Hot OG Rossie S putter that was making its Tour debut.

Rahm needed just 14 putts on the back nine en route to a third-round 64 that stretched his lead to six shots. The performance on the greens was a welcomed sight for Rahm, who ranked outside the top 100 in SG: Putting entering the week.

“He’s been struggling for a little bit now,” said Odyssey Tour rep Joe Toulon. “He just hasn’t been making those 8- to 10-footers that he normally makes to keep a round going, keep the momentum going. He wanted something to match his stroke with what he’s doing now. His stroke mechanics have changed a little bit and he wanted to get back to a different feel.”

To match his stroke mechanics, Rahm returned to a short slant neck — he most recently used a double-bend shaft — that allowed him to consistently rotate the head and square up the face at impact. (For those who are unfamiliar with Rahm’s putter history, the slant neck was his preferred option while using a TaylorMade Spider.)

“He gets it in a better position in his back stroke so he can make a more aggressive stroke through, without having to worry about pushing or pulling it,” Toulon said.

Rahm also swapped the traditional White Hot insert for a White Hot Microhinge that offered a quicker roll off the face to cut down on putts coming up short of the hole.

Rahm didn’t leave Ohio with the trophy, but he can rest easy knowing his putter search is over.

Collin Morikawa wanted to take a look at different putter options, so he did what many recreational golfers usually do — he went online and started building his own putter.

Using TaylorMade’s MyTP site, Morikawa combed through a myriad of options before sending along his specific asks to TaylorMade’s Tour department. According to TaylorMade, a consumer could spec out 90 percent of Morikawa’s current putter by using the MyTP site.

The loft was reduced to match his new setup which features a more forward hand position at impact. A stainless steel insert was also fashioned to the face to give it the firmer feel he prefers at impact.

If you can’t beat them, join them. At least that’s one way to look at Xander Schauffele’s latest putter change. One of the best putters on Tour, Schauffele tested a SuperStroke Traxion WristLock grip recently and noticed an immediate improvement with his stroke. (Schauffele had two degrees of loft added to his Odyssey O-Works #7 CH Red mallet to fit the grip and technique change.)

Schauffele ranked 13th in SG: Putting with the new putter grip. While it was a positive start to his first foray with the new stroke (and grip), Schauffele made it clear where he stood with regards to the armlock method.

“I am for banning the armlock putters, but if everyone else is going to use it and I feel like they have a bigger advantage, I may as well do the same,” he said.