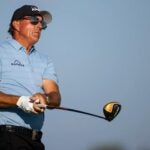 As you’ve probably noticed, Phil Mickelson has been “hitting bombs” and dropping “hellacious seeds” recently. Earlier this week, Mickelson took his newfound distance to his Champions Tour debut where he won by four shots.

In order to gain more distance, even as an 50-year-old golfer, Mickelson has done a number of things, including coffee diets and swing tricks. In more of a technical sense, Mickelson has also made a few tweaks to his driver setup.

If you’re searching for more distance on your drives, make sure to consult with your local professional club fitter and experiment for yourself!

1. Longer shaft for a longer carry

On the podcast, Pon reveled that Mickelson once told him the average distance to carry a fairway bunker on the PGA Tour is 310 yards. With that carry yardage in mind, Mickelson started experimenting with driver length.

Mickelson now uses a driver that measures 46 inches, whereas he used a shorter driver length in years past. This is a trick, of sorts, to gain swing speed. Shorter driver shaft builds typically offer greater control and tighter dispersion, while longer builds can achieve greater speeds.

Always the experimenter, Mickelson tried both shorter and longer builds, but found the distance benefit of the longer length outweighed the control of the shorter driver.

“He went through a process of maybe not hitting as many fairways as he wanted, so he tried a shorter shaft seeing if that gained some accuracy or improved his fairway statistics,” Pon said. “But any potential benefit on control was overwhelmed by the fact that he lost distance with the shorter driver.”

2. Higher launch, but with a low-lofted driver

To carry the ball far enough to reach 310 yards, the ball can’t fly too low or else it will fall out of the sky too quickly. That being the case, Mickelson strives to launch the ball higher with an upward angle of attack.

According to Pon, Mickelson’s attack angle with the driver is around 4-to-5 degrees up on a stock shot, and he launches it around 14-to-15 degrees.

On the flipside, you also don’t want to hit your driver too high or else it will balloon and lose distance. To make sure the ball doesn’t float, Mickelson uses a low-lofted Callaway Mavrik Sub Zero driver that measures 9 degrees.

For golfers at high speeds, too much spin can mean a loss of distance, especially in the wind. To control spin, Mickelson put the heaviest weight possible (14 grams) in the front position of his Mavrik Sub Zero driver head. That configuration works to shift CG (center of gravity) forward in the head and effectively lower spin.

What are Mickelson’s spin goals? Well, unlike most of us normal golfers, Mickelson likes to shape the ball both ways. Pon says that Mickelson wants to see draw shots around 2100 rpm (not too little), straight shots between 2300-2400, and cut shots in the upper 2000s (not too much).

Want to hear more insight from Pon? Check out our full 30-minute interview with him on the Fully Equipped podcast below!