A hole I love: Why Trinity Forest’s par-4 18th is a mighty-fine finisher 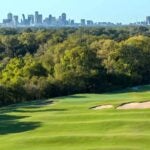 A view of the par-4 18th at Trinity Forest in Dallas, Texas.

The Old Course at St. Andrews was the favorite of Alister MacKenzie and Bob Jones, and it was very much in front of mind when they built Augusta National. Equally strong admirers of St. Andrews are the design team of Bill Coore and Ben Crenshaw. The irony is that, arguably, their best opportunity to capture the allure of such rippling land movement didn’t come in Tasmania or the Sand Hills of Nebraska but rather in a former landfill eight miles south of Dallas. Like at St. Andrews, the words “option-filled,” “ground game,” “shot variety,” “creativity,” “risk/reward” and “fun” describe Coore-Crenshaw’s Big D beauty Trinity Forest. Each of its 18 holes embodies these descriptors and requires the golfer to constantly think about tee-shot placement, approach risk, trajectory, shot shape and angles.

Its par-4 18th — 452 yards from the member tee, with the Great Trinity Forest guarding the left side — is representative of these asks. The aggressive line is left off the tee. If your ball avoids the left-center fairway bunker, it catches a speed slot, leaving a manageable approach to a green that is fully visible.

From the fairway’s easier-to-hit right side you’ll have a longer approach to a putting surface partially obscured by a pair of deep, protective bunkers 25 yards short of the green. Unless a north wind holds up a high shot and provides a soft landing, the best option for holding the right-to-left-sloped green is often a bouncing, lower-trajectory shot that lands just beyond the bunkers. Definitely a tense moment, but the risk is rewarded with perfect rollout from the tight Zoysia fairway.

Though the putting surface itself is large, its false front and fallaway slopes to the rear make it a vexing target. Poorly struck balls scamper across and off the left side or back. Short grass extends all around the green, but hitting a chip from a tight lie when the match is on the line is not for the faint of heart.

As is the case at St. Andrews, you’ll come to admire the variety of challenges short grass poses, and appreciate how, hole after hole, this Coore-Crenshaw design recognizes and rewards properly flighted, well-struck shots. It’s true that ocean views or dramatic landforms can be captivating, but subtle architecture — the kind that doesn’t scream at you — is often the most enduring. That’s Trinity Forest.