This week, Trinity Forest Golf Club makes its debut as the host of the AT&T Byron Nelson. The course is a Bill Coore and Ben Crenshaw design that is distinctly different from most Tour courses we see week in and week out.

Trinity Forest is built on an old landfill; it’s comprised largely of short grass and fescue and plays in some ways like a classic links course with broad fairways, massive sloping double greens and fescue just off the fairways. The Tour’s relocation there has earned praise from fans of modern golf course architecture eager to see pros think their way around the golf course. But players are notoriously change-averse — what do they think of this new challenge?

Jordan Spieth has had some time to adjust to the golf course; it’s in his backyard and he has estimated having played the course some 30-40 times as a member there. He cited the par-3 17th as one hole where his perception has evolved over time. “The first time I played it I’m like, ‘What are we doing here?’ Spieth said. “Now I think it can be a pretty exciting, you know, finish where you can feed one in there and make a 2 on maybe the 71st hole that makes a difference.” 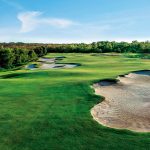 Spieth added that he has gotten plenty of questions from fellow Tour pros about the place. What does he tell them? “It’s really fun as a member as a change of pace kind of a golf club,” Spieth said. “Also reminds me of Birkdale, kind of a links-style course you have to play from the air on a lot of it with big slopey greens. Feels great and looks great. I like the vibe of the course while I’m out there. That’s what I say.”

Overall, he’s optimistic. “I really think this course is going to make a great impact. I think people were skeptical a year ago and I think it’s going to be a happy surprise this week,” he said.

Billy Horschel is the event’s defending champion but said he has been impressed with the new design. “I was a little uneasy coming here, because I heard horror stories about this place and good things about this place,” he admitted. “But I’m a big fan of Bill Coore and Ben Crenshaw. I think they’re the top two architects in today’s game. When I stepped on the course yesterday and played, I thought wow, this course is pretty cool — I don’t think it’s tricked up by any sense.” Adam Scott echoed that sentiment. “There was a lot of talk in the locker room over the last few months about this golf course because it’s very different than most PGA TOUR venues,” he said. “You know, people are going to get put out of their comfort zones and not many people like that, you know.” Scott himself said he would relish the chance to play the course in its intended condition, firm and fast, although he expects slow play due to tricky putts on large unfamiliar greens, and suggested caution when it comes to course setup early on.

“The greens were a little quick yesterday in the wind. I mean they’re quite severe, some of the slopes on the green, and if they get too fast I think it’s going to be a little hard to control anything running up on to the green, you know, kind of needs to find that good balance point of challenging and fair,” he said. “I think probably if I was setting the course up the first two days I’d be fairly generous with pin placements and then maybe have at it on the weekend.”[image:14140439]

Nobody was more enthusiastic to get out on the new track than architectural aficionado Zac Blair, who tweeted his excitement.

Blair has posted pictures and insight from nearly every hole on the course throughout practice rounds this week.

Definitely wanna stay outta the scab bunkers down the right of 10 pic.twitter.com/um7KfeSwBc

Geoff Ogilvy, who has seen the course throughout its design, is eager to see other pros take on the challenge, particularly playing shots along the ground. “We’ll have to work this one out. It’s going to take a few years for guys to really kind of work this course out, which I think is really interesting to watch and play.

Hunter Mahan likely has more experience than any other player in the field this week — he’s a member, estimates he’s rounded Trinity Forest nearly 70 times, and said he expects the course will be “an incredible venue” for the event. If the wind is down, he said fans should expect plenty of birdies, given reachable par 5s and at least one drivable par 4. Mahan expects the course itself will be enough to convert players. “I think the player’s opinions are probably — I don’t know really what they are right now but I think throughout the week they’re going to understand it more and more and are going to like it more and more.”