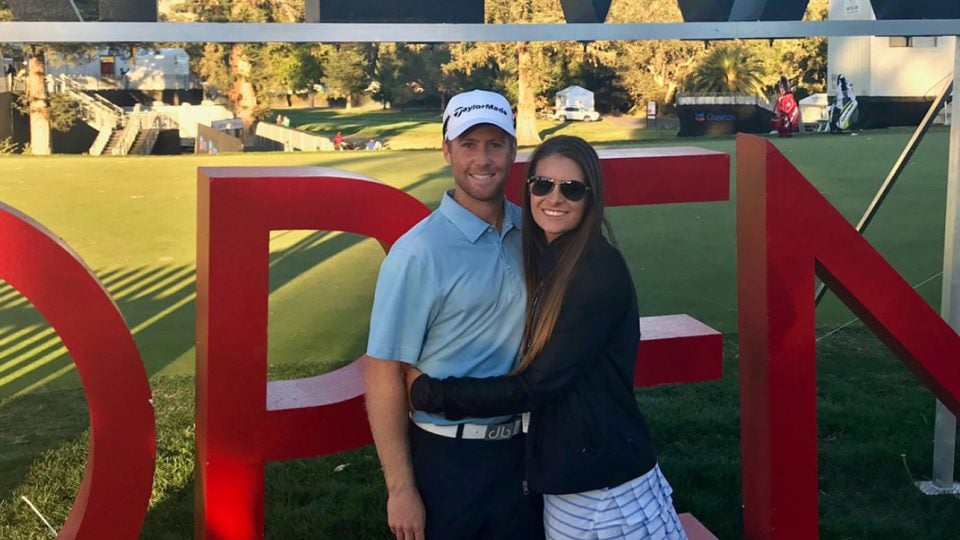 Tyler Duncan, a 29-year-old pro in his second full year on the PGA Tour, is having a good week in Dallas. After firing two solid opening rounds of 64-66 at the AT&T Byron Nelson, he’s tied for second at 12 under par overall — four shots behind Sung Kang’s lead.

But on Friday, things nearly took an unfortunate turn. According to the PGA Tour, Duncan missed the green on the par-4 13th hole at Trinity Forest. His errant approach went right of the green, taking a bounce before hitting a spectator and settling about 33 yards away from the hole. Unbeknownst to Duncan, the spectator was his wife, Maria. In fact, he didn’t discover it was her until after he had completed his round.

“Took a big bounce and hit her, I guess,” Duncan said. “I didn’t know until after the round. … I’m just happy she’s not hurt, and I was with her a while ago.”

Duncan’s botched approach led to his only bogey of the day when he failed to get it up-and-down. He recovered well, though, playing his final five holes in one under par to finish five under par on the day.

Somewhat remarkably, Friday was not the first time Duncan’s wife had been struck by a golf ball.

“Not long after we started dating, she actually got hit in the head by another ball, a random ball from the driving range,” Duncan said. “She’s dodged two hits to the head. I’m sure most people can’t say that.” Duncan and his wife were married in 2017.

Duncan has yet to win a tournament on the PGA Tour, but he had two top-10 finishes last season. This year, his best finish is T22 at the AT&T Pebble Beach Pro-Am. He’s in good position now to to improve upon that stat this week.