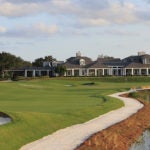 A view of the 18th green and clubhouse at Medalist Golf Club.

So, you want a Medalist membership so you can tee it up near Tiger Woods, Rickie Fowler, Dustin Johnson and the boys? Sure, you can do that, but it’s going to cost you.

Greg Norman was one of the club’s founders and co-designed the 18-hole course with Pete Dye, which opened in 1995. That same year it hosted a Shell’s Wonderful World of Golf duel between Norman and Nick Price. Price, at the time, was ranked No. 1 in the world, and Norman was No. 2. Now Medalist is back as the star for Sunday’s The Match: Champions for Charity, where we’ll see Woods and Peyton Manning team up against Phil Mickelson and Tom Brady. The match begins at 3 p.m. ET on TNT, TBS, truTV and HLN.

$35
Made in partnership with GOLF.com, this 3-pack of masks features new designs for golf enthusiasts. Proceeds go to the Golf Emergency Relief Fund, providing short-term financial assistance to those facing hardship due to COVID-19.
Buy Now

How much does a Medalist membership cost?

It’s not cheap. According to The Golf Life Agent, which breaks down prices for both Medalist Golf Club and homes in Medalist Village, the initiation fee for a membership at Medalist Golf Club is $110,000. The same website says member dues are $18,000 a year.

MORE: How to watch the Match II | Why do pros love Medalist?

But that’s the price for your average golfer. According to The Palm Beach Post, the initiation fee is waived for most Tour pros, although they still pay annual dues.

Who are the famous golfers who are members at Medalist?

In 2013, The Post reported that Medalist had 270 members, and 22 of them were PGA Tour or LPGA players. Woods, not surprisingly, in the club’s most famous member. He moved from Orlando to Jupiter, Fla., near Medalist, in 2011. Woods lives within a 20-minute drive from the course.

“It’s about the value of the membership,” De Mudd, a former Medalist president, told The Post years ago. “Getting members to enjoy the club, coming out and using it on a daily basis. We have no financial issues whatsoever; we have money to invest in the club, money to run the club, and we’re fortunate that way.”

Field guide: A $25 green fee for a course with America's first island green