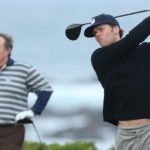 As a native New Englander, I’ve been fortunate enough to watch Tom Brady quarterback the Patriots over the last couple decades. But you don’t have to be a Pats fan to appreciate the 6th-round pick’s dedication to doing the work and his unparalleled ability to stay cool under pressure. But what’s the best football player of all time like on the golf course? Here are five things to know about Tom Brady the golfer.

Brady, who carries an 8.1 handicap, says his game is “somewhere between poor and pitiful” entering The Match II, and if you’re looking to bet against Brady, you’ve got some ammo. Last year, Brady said he was playing golf in Florida when he threw down a 95 at MacArthur. After that, he said, he didn’t think things could get any worse — until he headed over to Medalist, the site of this week’s match. Then he shot 106.

But if you’re looking for optimism, there’s space for that, too. In a recent interview with Boston-based radio station WEEI, James Driscoll recalled playing the AT&T Pebble Beach Pro-Am alongside Brady. After a slow start to the week, Driscoll said he suddenly caught fire on day three, firing a three-under 33 on the front nine at Pebble Beach.

In short, Brady sounds like a volatile 8.1 handicap. You can see his scores here:

2. He’s got some famous memberships.

One strange quirk about Brady’s time in the Boston area is that even though he lived next-door to The Country Club at Brookline, it took two years for the star quarterback to get his membership approved, which finally happened in 2017. Still, he got a few years’-worth of play in before signing a deal with the Tampa Bay Buccaneers this offseason.

In preparation for the move to Florida, Brady got some premier golf lined up when he joined Seminole in Juno Beach, Fla. — the site of last week’s TaylorMade skins game. He’s also reportedly a member at Riviera in Los Angeles.

Not at the same time, either! If we’re making Manning-Brady comparisons, Manning still gets the Augusta edge — the guy’s a member, after all. But Brady played Augusta alongside Rory McIlroy in 2015…

Better yet, he played another match at Augusta against Jordan Spieth in which Spieth bested him on the last — and then got the silent treatment.

“He made bogey and I made birdie for a two-shot flip on the last,” Spieth explained on the Dan Patrick Show. “And you’re supposed to go in at Augusta and, you know, have lunch, and hang out, and he didn’t say a word to me for like an hour and a half. I mean, the most competitive, like, I feel like I’ve very, very competitive, and he is the most competitive human being I’ve ever met.”

Sure has — in Entourage! Brady made a cameo in Season 6 in a tournament alongside Johnny Drama, Vince Chase and Mark Wahlberg. The irony of the scene is that Brady’s cameo was originally written for a different set of quarterbacks: the Manning brothers.

‘That scene in the show where he’s in the golf tournament with Johnny Drama and Mark Wahlberg was initially for the Manning brothers,” said Jerry Ferrara (who plays Turtle) in an interview with Sports Illustrated. “But then something happened where they had to pull out like four days before.”

According to Ferrara, Wahlberg then called Brady, who agreed to fill in.

5. He can get hot against Tour competition.

Sports fans got particularly excited in the winter of 2015 when the foursome of Brady, Michael Jordan, Keegan Bradley and Luke Donald teed it up in the Bahamas. Bradley, a Vermont native and voracious New England sports fan, was ecstatic to tee it up alongside his football hero.

But when the two squared off for a second round, Brady gave Bradley more than he bargained for. Bradley recounted the events on ESPN’s SVP and Russillo.

“I say, ‘Tom Brady, I’m going to give him 12 shots, and this is easy money,'” Bradley remembers. “I’m getting all cocky on the first tee, and I get a match with him,” Bradley said. “I win the first hole and go, ‘T.B., I’ll give you a buyout if you want.’ I start to chirp. And then he runs off — he plays the next 14 holes 4-under par, beat me 6&5. He’s really good, like I couldn’t believe. As soon as we get the match, his competitive juices kicked in, he’s smoking.”