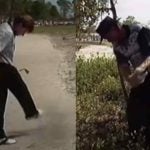 Price, left, and Norman faced a stern test at Medalist in 1995.

Twenty-five years ago, Medalist Golf Club played host to another high-wattage exhibition. Nick Price, then the world No. 1, took on Greg Norman, the world No. 2, in a Shell’s Wonderful World of Golf duel. There was no Charles Barkley in the booth, no wacky prop bets on FanDuel, no alternate-shot format with two quarterbacking legends. It was just a good old-fashioned stroke-play showdown between two golfing giants.

To that point, Medalist was largely untested and certainly unknown, having opened just months earlier. But from Jack Whitaker’s introductory remarks on the ABC Sports telecast, it would have quickly become clear to viewers that Pete Dye and Norman’s collaboration in Hobe Sound, Fla., did not suffer fools.

“It features a truly Norman-esque par-5 of 663 yards,” Whitaker intoned, referring to the 13th, adding, “A stern test of golf, the 18 holes here have been fitted among the native pines and sand hills without disturbing the abundant wildlife and marshes that are so prevalent here.”

Old friends Norman and Price were smiling and cordial on the 1st tee as Steve Melnyk introduced them, but they had to be girding themselves for the test that awaited, a 7,175-yard monster defined by sand sprawls, water and fearsome carries. You would do well to identify a more visually daunting course. As club president Kevin Quigley told my colleague Alan Shipnuck, “It had to be one of the hardest courses in the world.” Still, Melnyk said hopefully to folks watching at home, “Somehow I think we’re going to see some good golf here today.”

Things looked promising at the shortish par-4 1st when Price threw a dart to two feet and tapped in his birdie putt. Let the shootout begin! But the dazzling shotmaking wouldn’t last. When Price found the yawning trap right of the 2nd fairway, Norman said to his caddie, Tony Navarro, “You can’t miss with these bunkers around here, Tony.”

Norman would know — after all, the Aussie legend built the place with another designer who reveled in putting a scare into golfers. Later in the telecast, in a taped segment, Norman and Dye wander into a ghastly bunker by the 18th fairway; the lip is two to three feet above their heads. “I want the world to know you’re responsible for this bunker,” Dye says to Norman, laughing. “I’m Mr. Soft.”

Norman explains that his and Dye’s design was inspired by a medley of the greats: St. Andrews, Harbour Town, Royal Melbourne, Augusta National.

On the 3rd hole, Norman hits his first snag. A spotter ventures into the scruff right of the fairway to find Norman’s tee shot. “Not where you want to be,” Melynk says.

Price finds the sand on other side of the fairway.

The next few hole features more sandy blasts and hardworking pars and at least one cruel lip-out. On the 8th, Price tries to muscle one out of a fairway bunker, resulting in a “cold, flat top,” as Melnyk describes it. Price took out his frustration thusly:

Credit to both players for making the turn around par — Price at one under, thanks to a blazing hot putter, and Norman at a birdie-less one over. But the event felt less like an easy, breezy exhibition than a U.S. Open-grade grind.

On the 10th green, when Norman finally made his first birdie, he woofed like dog and threw his arms into the air in mock celebration. It was that kind of day. When Norman mustered another birdie at 12, which Price bogeyed, he pulled ahead by one. But then Medalist bit back. We’ll let the visuals tell the story from here.

Price at 12, one foot in a greenside bunker, one foot out, resulting in a bogey:

Price at 13, another bogey:

When Price bogeyed the 16th to Norman’s par, Norman still had a one-shot edge. Then came the terrifying par-3 16th, with the wind freshening. Norman on the tee — splash.

He re-tees, knocking his third shot through the green, chips on, then misses this, leading to a triple-bogey 6:

A hole later, more trouble. Props to Norman for saving bogey from this mess:

When the carnage was over, Price had prevailed by four, posting a scrappy even-par 72 to Norman’s 76. Their cumulative stat line included seven bogies, one double, one triple.

“It was tough golf course,” Price said to Norman as they shook hands on 18, trying to console his friend.

“Yeah, too tough for me,” Norman said, smiling, but no doubt also smarting. “I blame the guy who designed it. I blame Pete Dye.”

In the years since Price and Norman’s clash, the course has been somewhat defanged, both by Norman and designer Bobby Weed, meaning it will not play as tough this weekend for Tiger Woods, Phil Mickelson, Tom Brady and Peyton Manning. But Medalist undoubtedly still breathes fire. When the dust settles on the Match II on Sunday evening, don’t be surprised if the golf course has won again.

Rory McIlroy has a new Tiger-inspired strategy. Here's why it makes sense