The best hole I ever played: Inside the greatest hole on the finest mountain course in the world 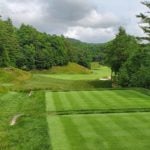 A view from the tee box of the par-5 1st hole at Wade Hampton Golf Club in Cashiers, N.C.

Our knowledgeable crew of course raters have stuck pegs in the ground just about everywhere. But which holes stand out as the greatest they’ve ever played? We asked them, and they replied with love letters about their faves. This offering comes from Adam Messix.

For me, a great golf hole should have plenty of strategic interest, a fair degree of challenge and a keen sense of place, with an appearance at one with its surroundings. There are many famous holes that fit my criteria, such as 18 at Pebble Beach, 13 at Augusta National, 4 at National Golf Links, and just about any hole on the front nine of Royal County Down. One of the lesser-known examples that ticks all the boxes is the opening hole of Wade Hampton Golf Club, a Tom Fazio design in Cashiers, N.C.

Standing on the tee, you see the hole weaving through an idyllic mountain landscape. At 544 yards from the back tees and working downhill, it’s not a long par-5, and the potential for a great start is there for the strong player. There’s a large, inviting fairway with a steep mountainside in the distance, and three bunkers down the right, with plenty of room to the left. For the average player, the play is to get as close to the fairway bunkers as possible, allowing for a second shot down the left toward a hollow in the fairway, approximately 100 yards from the green. From there, it’s an open look to a relatively deep green. The farther left the tee shot strays, the more you have to deal with a steep hillside on the second, which forces you to play to the right toward rough and trees. This leaves you with a more complicated third shot from a difficult angle. The green becomes a shallower target, with bunkers in your line both front and back.

From the tee, better players can take on the steep hillside to reach the narrowest part of the fairway. But there are perils to this approach. A tee shot pulled into the hillside leaves a likely sideways pitch out, turning a potential birdie or eagle into a difficult par.

The green is the appropriate size for a hole of this length, smallish with a ridge running through it. Putts from the back left to the front right are especially treacherous.

Aided by the shaping work of Tom Marzolf and the late Mike Strantz, Fazio did a brilliant job of fitting the hole into the terrain, using spoils from blasting elsewhere on the property to create an artistic green site that ties in perfectly with its mountain surrounds. People are amazed when informed that the hill left of the first green was the creation of Fazio and his team. It looks entirely natural, and the varied texture of the grasses as the green gives way to the rising hillside and adds to the hole’s aesthetic appeal.

Visually stunning, the 1st at Wade Hampton is also a strategic gem. Its brilliance is that it allows you to attack if you dare or play safe if you prefer, with positioning being of utmost importance. It provides the opportunity for a jump-starting eagle or a card-wrecking double bogey, a balance of pitfalls and possibilities. The use of a steep hillside as a hazard is rare, and it’s employed adroitly here. It sets the theme of strategic and risk/reward play throughout a round on the finest mountain course in the world.