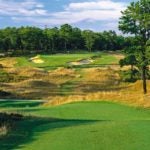 1. With the PGA Tour in the northeast this week, we turn our architectural eye to New England. Only two courses from the region (The Country Club, in Brookline, and Yale Golf Course, in Connecticut) made GOLF Magazine’s most recent list of Top 100 Courses. Are these really the two best courses in New England? If not, tell us what we’re missing. If so, tell us which course in New England is third best, and why?

Jeff Lewis (panelist since 2003; has played 97 of the World Top 100): Old Sandwich, Eastward Ho! and Myopia Hunt would all have to be in strong consideration for that third spot. In this group, Old Sandwich is a Crenshaw/Coore (Golden Age-inspired) design that gives me a little bit of an Australian feel and the other two are Golden Age classics. New England is chock full of great, under the radar, gems and probably has the greatest concentration of Donald Ross courses anywhere in the country.

Michael Pelliccione (panelist since 2020; has played 60 of the World Top 100): When talking about the best golf in New England it’s hard not to mention the likes of Brookline or Yale which are more than deserving of Top 100 consideration. The one that often gets overlooked, and a personal favorite of mine, is Myopia Hunt Club in South Hamilton, Mass.   MHC brings together a lot of what is missing in golf today. Its short length, quirkiness and low-key vibe makes you want to play it again and again. MHC takes you back to when golf was once played in the late 1800s over in the UK. Honorable mention would be Boston Golf Club in Hingham, Mass. BGC’s simple clubhouse, tight membership and limited amenities puts the main focus on its bread and butter and that’s world-class Gil Hanse designed golf course. Fun fact: BGC is one of the top courses to close on a par 3!

Hal Phillips (panelist since 1997; has played 71 of the World Top 100): Massachusetts in particular seems to suffer, a bit perversely, from an oversupply of really great courses that somehow diminishes the lot, as it’s very difficult to choose between them all. I agree with Michael P. that Myopia should be in with a shout for Top 100. It’s antique, to be sure, but it has been tweaked to great effect, the terrain remains dramatic and brilliantly deployed, and each time I’ve encountered it, over the course of 30 years, it plays as truly and formidably in the “modern” day as almost any course of that vintage I can think of. That said, there are dozen “classics” every bit Myopia’s equal in the Bay State: Essex County, Charles River, Winchester, Brae Burn, Eastward Ho!, Kittansett, Salem, Taconic and Hyannisport (I’m probably leaving some out from Worcester and Springfield areas). From the modern bin, I’d put Boston Golf Club, the Vineyard Club and Old Sandwich in that company. All of these are certainly worthy of serious Top 100 consideration. For whatever reason, other U.S. metropolitan areas without so deep a roster seem to be better represented? Maybe that’s just my inner Masshole talking.

Noel Freeman (panelist since 2010; has played 81 of the World Top 100): I’d say the third-best course is a tie between Eastward Ho! and Newport Country Club.  Eastward Ho! plays over rambunctious rollicking terrain very much heaving, like the Course at Yale, yet benefitting from the location adjacent to Pleasant Bay.  It is one of the most distinctive courses in the country with only Yale and perhaps White Bear Yacht Club in Minnesota offering up an experience where you play up and through the landform with such capriciousness of the terra firma.

2. What’s the best public access course in New England, and why?

Jeff Lewis: For me, Taconic holds a very special place.  In Williamstown, Mass., in the northeast corner of the state, this is the type of course where you see locals and Williams College students pushing carts and enjoying a wonderful trip back in time.   Highly recommended if one makes the trip to the Berkshires.

Michael Pelliccione: Newport National Golf Club in Middletown, R.I. often finds itself on the top of the public rankings, but it is often overlooked given the abundance of private clubs nearby. The course is always well maintained and has an enjoyable layout with fun green complexes to keep you guessing. A weekend getaway in Newport isn’t complete without a visit to Newport National.

Hal Phillips: I like RedTail GC in Devens, Mass., just outside I-495. Amazing property with an extraordinary diversity of holes. Mountain category: Sunday River in Maine. And for seaside golf: Farm Neck on Martha’s Vineyard.

Noel Freeman: Well, Yale technically is semi-private but to be different I’m going to stay in the Nutmeg state and choose Shennecossett in Groton, it’s right on the water and is the closest golf course to Fishers Island.  This has 14 very solid Donald Ross holes and 4 serviceable holes done by Mark Mungean when the muni did a land swap with Pfizer. It’s affordable and good, strategic bang for your buck golf.

3. What’s your favorite New England sleeper? A sentence or two of explanation, please. (And bonus points for the oft-overlooked states of Maine, New Hampshire and Vermont).

Jeff Lewis: In Vermont, I think Ekwanok is probably the class of the joint.  Have to admit you stumped me on Maine and New Hampshire. Rhode Island, on the other hand, is really something.  Maybe the state with the highest percentage of its landmass made up of high-quality golf.  From Tillinghast’s Newport CC to the Ross gems Wannamoisset, Misquamicut, Sakonnet and Raynor’s Wanumetonomy, one doesn’t have to drive far to find worthwhile (and unpronounceable) gems!

I would also like to pay a little compliment to this week’s Tour course.  The closing stretch has been the site of so many dramatic finishes and comebacks. Who doesn’t look forward to watching them play the driveable 15th on Sunday? Any course that brings out Bubba Watson, Phil Mickelson, Greg Norman, Nick Price as well as a bunch of shorter hitters is worth the Tour’s while.

Michael Pellicione: Tough one. It’s hard to only select one course given the depth of great golf in New England.  The two that stand out are Ekwanok Country Club in Manchester, Vt. and Eastward Ho! Club in Chatham, Mass.  Both courses are vastly different in their own right.   Ekwanok is an ideal fall retreat with the Green Mountain serving as a beautiful backdrop. On the other hand, Eastward Ho! Is the perfect summer escape overlooking Little Pleasant Bay. The one thing they have in common is you could play them every day and never get bored.

Hal Phillips: Cape Cod National GC out in Brewster is really, really good. Some of Brian Silva’s very best work. One middling hole and 17 superb ones. It’s private but used to have a deal whereby you stay at the Chatham Bars Inn or some such place and get a round at CCN in the bargain. Well worth it.

Noel Freeman: I’m going to go off-piste here and choose Whitinsville in Mass.  It may be only nine holes but what bang for those nine holes.  Ross did a masterful routing job over rolling terrain with terrific angles, bold bunkering and his usual green contouring. It is a blast to play and leaves you wanting for more — so just go back around.