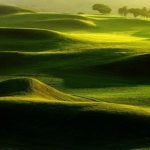 "Crowdsource," a design that suffers from too much input.

Golf architecture nerds love nothing more than a “template hole” — designs patterned upon strategically brilliant holes from across the pond. When C.B. Macdonald cribs from his predecessors, that’s “homage,” but when we golf writers do it, here come the cease-and-desist letters and nastygrams. Anyway, enough with kowtowing to the Brits and to history. With tongue firmly in cheek, let’s make new 21st-century patterns right here in the good old U.S. of A.!

Where is it written that every hole must be “interesting” or “thought-provoking”? Sometimes, you just want to veg out, dude. This perfectly flat, straightaway hole features no features at all except tee markers and a hole somewhere in the distance — 100, 200, 300 yards, it doesn’t make any difference. If a golfer remembers Yawn at round’s end, it wasn’t built properly.

This hole begins life as a drivable par 4 with sharp-edged bunkers and a manmade pond fronting the green. But due to unrelenting criticism from social-media influencers, it is lengthened to a drive-and-pitch two-shotter that more adheres to the lay of the land. Alas, this doesn’t sit well with course raters, who clamor for it to be returned to its original intent. The result is a mess of conflicting design styles that leaves the hole virtually unplayable.

A short par-3 of somewhere between 110-130 yards, the tee shot traverses a bottomless pit, down, down, down into which the player must gaze while crossing via a rickety footbridge. The resulting existential dread makes even the shortest birdie putt a real knee-knocker!

Get your head around that.

This hole begins with a tee box composed exclusively of locally sourced grass. Its handcrafted fairway was literally shaped by hand, using no heavy machinery or even oxen — nothing but human hands moving dirt one scoop at a time. The green, a symphony of ridges, swales, hollows, bumps and noses featuring precisely no flat spots, is a three-dimensional manifestation of a Rorschach test once given to Ben Crenshaw.

Just a brutal hole. Really, it’s, like, impossible. Trees are set willy-nilly as far as the eye can see. The fairway is purely theoretical. You can’t run the ball onto the green due to the alligator-filled moat in front. Fly it in? Fat chance — the rock-hard green is tilted away from you, so shots bound into the moat. Like, seriously, what kind of sadist designed this damn thing?

After completing the preceding hole, to reach Ninja’s tee box the player must surmount a 10-foot-high rope wall, golf bag on shoulder, before belly-crawling through a sand pit, which the player then must rake for the group behind. The hole itself, featuring obstacles such as the Flying Squirrel, the One-Handed Flop and the Bar Cart Push, needs to be completed within five minutes, or the player is disqualified and gets whomped with a giant inflatable sand wedge.

Kind of like a Cape hole, only not. Instead of curving around a water hazard, with a drive of ever-greater risk the more aggressive the line, Martyr begins as a par-5 hole straight toward the ocean. Over time, as the seas rise due to melting polar ice caps, it eventually becomes a par-4 and then a par-3. In time, the hole becomes nothing but a water hazard.

One part Tillinghast, two parts Kierkegaard, Sink plays over a literal and metaphorical cliff to a bowl-shaped green on which all putts break downhill, even from the low point. The intrigue and psychological terror of the design lies in the physical reminder it provides that everything in golf — and life — is absent meaning, a point hammered home when the putting surface’s defining feature opens wide and sucks you underground, leaving you to ponder, for as long as oxygen remains in that lightless, remorseless pit, why you ever bothered with this silly game.

Field guide: A $25 green fee for a course with America's first island green