7 things you must know about Bandon Dunes, according to the course architect 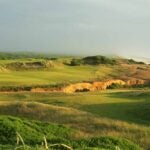 As the final matches of the 2020 U.S. Amateur Championship play out this week at Bandon Dunes in southern Oregon, among those watching with special interest will be the golf course architect David McLay Kidd.

Kidd is the author of a number of noted layouts, including Gamble Sands in eastern Washington, Mammoth Dunes in Wisconsin, and Nanea on the Big Island of Hawaii. But Bandon Dunes is his most celebrated work and the job that first made his name.

Because no one knows a golf course like the person who designed it, GOLF.com asked Kidd to share his insights into some of Bandon Dunes’ defining features, and what he—and we—might look out for as the competition unfolds. Here are 7 of his takeaways.

Along the Oregon coast, the prevailing wind shifts with the seasons. In winter, it whips from the south. But in summer, a switch flips, and the fan starts blowing from the north. “If you’ve only ever played Bandon in January, and then you show up in the middle of August,” Kidd says, “you’re going to find the course is a very different beast.” In summery conditions, Kidd says, a handful of holes morph into monsters, including the par-4 5th, the par-4 11th and the par-3 15th, all of which work straight into the breeze. Sure enough, those three holes that have been playing the highest over par this week for the best amateurs in the world.

2. What You See From Three Tee

Like many architects, when Kidd dreams up a routing, he doesn’t think of individual holes. He envisions a 1-through-18 sequence aimed, he says, to “take you on a journey through a landscape.”

At Bandon Dunes, that journey starts at a low point on the property, just behind the clubhouse, with the rumble of the ocean a rumor in the distance. But it soon offers hints of what awaits. By the time golfers reach the tee box of the par-5 3rd, they’re standing on a high point of the course. “From there you can see every single green, tee and fairway on the course,” Kidd says. “And on the horizon, the Pacific kissing the sky.” It’s quite the sight, and it should look plenty stunning on TV.

After teasing you with sights and sounds of the ocean, Kidd brings you right up to its dramatic edge. It happens on the par-4 4th hole, a dogleg right that angles ever slightly toward the ocean, then bends and opens toward the big reveal: an infinity green set on the bluffs, with towering breakers frothing in the backdrop. It’s a postcard putting surface, and that’s not all, Kidd says. It also sits on one of the western-most points on the continental United States.

On a windy, sandy site like Bandon Dunes, Mother Nature shapes and reshapes the landscape over time. But foot-traffic can also have a profound impact. That influence, Kidd says, is especially evident on the 5th hole, a long par-4 that runs along the water.

When the course first opened, in 1999, the landing area off the tee was tighter, with gorse creeping in from the right, and the fairway was pocked with islands of gnarly native grasses that swallowed misplaced drives. Although those islands remain, the tangled grasses have been trampled down by countless pairs of feet. “Twenty year ago, a ball never would have bounced through those little islands,” Kidd says. “But now it’s very hard to lose a ball in there.” Competitors this weekend can be thankful for that bit of forgiveness, as the hole is bound to be a brute, playing dead into the breeze.

Just last year, Kidd returned to Bandon Dunes to rework a number of bunkers, including one the layout’s most daunting hazards: a cavernous trap at the front-right of the par-3 15th green. In its original configuration, this was one of those sandy pits that an average Joe might enter and take five failed hacks trying to escape. “The best source of feedback for us is the caddies,” Kidd says. “And the caddies all agreed that that bunker was a total card-wrecker for guests, so we showed some mercy.” On TV this weekend, you’ll see a smaller, shallower version of the bunker. But that doesn’t mean the hole won’t still be fearsome. “Dead into the wind, with a little margin for error left but otherwise nowhere really to miss,” Kidd says. “This is just one of those holes where you’ve got to hit a shot.”

6. Match Play Made in Heaven

Growing up in Scotland, Kidd was raised on match play. In designing Bandon Dunes, he had match play on his mind. He wanted holes with options and varied outcomes, holes where a par might come fairly easily but a birdie would require boldness and bring double-bogey into play. Nowhere does this approach come into sharper relief than on holes 14 through 17, the closing stretch where most matches come to an end. “Stroke play tends to become a very defensive game as you head toward the finish,” Kidd said. “I wanted all the ‘do I go for it or not’ strategy that match play brings to golf.”

The 14th is a relatively short par-4 with a forever-wide fairway pinched by three bunkers that make the landing area tighter the more aggressively you take it off the tee. “There are at least three or four legitimate ways to play that hole,” Kidd says. “Some are a very safe par, some are very risky if you go for birdie.” The 15th is that do-or-die par-3. Take dead aim and put the pressure on your opponent. The 16th is a reachable par-4, set along the bluffs, with the narrowest of margins between the chance making eagle and making a mess. The 17th is a downhill par-4 with a landing area that narrows the farther you go. The approach is to the largest green on property, measuring 80 yards front to back. Depending on where they cut the cup, players might have either a wedge or a 6-iron to the pin.

Speaking of that par-4 16th. At Bandon Dunes, they don’t like to talk about signature holes, but if they did, this might be the one. Playing downwind, along the bluffs, it will be reachable with 3-wood, or less, for competitors this weekend, though the slightest miss right will lead to loss of hole. When Kidd plays this beauty in summer, he takes a strategic page from the Road Hole on the Old Course at St. Andrews, where the smart approach is often long left of the green towards the 18th tee, which leaves a simpler pitch back toward the flag. Same goes for the 16th at Bandon Dunes. Kidd says that were he caddying this weekend, he’d tell his man to aim long left of the green, taking it toward the 17th tee box. From there, it’s a short pitch back into the wind to set up birdie. During Friday’s matches, several players opted for that route. “If they’re smart, they’ll be doing that this weekend, too,” Kidd says.