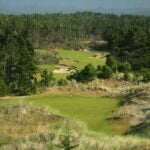 A view of the 2nd and 3rd holes on Bandon Trails at Bandon Dunes Golf Resort.

For guests at Bandon Dunes Golf Resort — home to this week’s U.S. Amateur Championship — ranking the property’s courses is popular fodder for grill room debate. Since you’ve all been there, done that, let’s get your ranking of Bandon’s five 18-hole courses. (If you haven’t played the newly opened Sheep Ranch, you can simply rank the other four.)

Tripp Davis (panelist since 2010; has played 50 of the Top 100): I have played Bandon Dunes and Bandon Trails in the U.S. Mid-Am and played Pacific Dunes as well. Bandon Dunes is the most fun and may be the best of those I played. Bandon Trails was the most difficult of those three and had some awkward holes/shots that didn’t seem to really fit. Pacific Dunes was the most beautiful, but had a very indifferent strategic design for better players.

Thomas Brown (panelist since 2015; has played 95 of the Top 100): It would be a lot more fun to debate this in McKee’s Pub after a 36-hole day. I have been following scoring at this week’s U.S. Amateur closely. Any of the courses is a worthy candidate for the top slot. If forced to choose, I would rank Pacific Dunes over Bandon Trails. Pacific is a spectacular setting with several holes that force the golfer to consider strategy and bounce. Trails has a routing/sequence of holes that bolsters Bill Coore’s reputation to identify the best pacing in golf. As for the other courses, I think Old Macdonald is underestimated, and Sheep Ranch is the most visually spectacular of the group. I would guess Sheep Ranch will get the majority of the votes when we return to McKee’s next.

Vaughn Halyard (panelist since 2020; has played 40 of the Top 100): This is a cyclonic question as there are no lesser choices for me, only personal preference. I try to match course selection to the capability of traveling companions. I came to the game later in life so am neither burdened by the hypnosis of the resistance to scoring concept, nor haunted by a defense of par. My course preference is determined by the present company. I always try to start with Keiser’s original crazy idea, Bandon Dunes. Bandon is living history and I try to celebrate the reverence from the first shot. After that I am flexible. If I am with a true stick that never saw a pin that didn’t make their trigger finger itch, I suggest Bandon Trails next. That is the players’ place in the sand. A spectacular journey from ocean view with a walk up into the woods. Trails will test your group’s “stick.” If I have a sight-seeing and selfies crew, Pacific Dunes is the second round. It is a series of connected look-where-I-am postcards framed by spectacular golf. I have yet to play the Sheep Ranch, so my current finale favorite is Old Mac. That is the true laugh out loud, “Let me try that putt again, can you believe this hole?” festival. The tone is set from the first shot as you look toward the impending elevation change looming at the 3rd hole. That festival continues for 18 holes. If I gambled in golf, this MIGHT be where I would do it. I don’t rank them as much as match them to the audience.

Jeff Lewis (panelist since 2003; has played 97 of the World Top 100): I have always been a bit underwhelmed by Bandon Dunes. Didn’t feel like much of a contest with Pacific Dunes once that opened. Trails is probably the best-designed course on the property, even though it is on a much more challenging piece of land. If I had 10 rounds to play, it’d be four on Pacific Dunes, three on Trails, two on Old Mac and one on Bandon Dunes. Oh, actually — scratch that. My favorite course there is the 13-hole par-3, The Preserve. That’s sheer pleasure at the end of a long day. Insane how great it is. I wonder how many people go through the place and never even play it.

Bill Hogan (Panelist since 1998; has played 62 of the World Top 100): This debate takes place at the end of every trip, and I’ve been there probably 10 or 11 times. There are no right or wrong answers, obviously, but for me the best course is Bandon Trails. Even though it is not on the water, I find it the most beautiful and enjoyable to play. Pacific Dunes ranks second in my book, just slightly better than the original Bandon Dunes. Old Macdonald, if placed anywhere else in the world, would enjoy far higher acclaim, but when in the midst of some true masterpieces it will probably never get the credit it deserves. I have not yet played the new Sheep Ranch, so I can’t comment on that yet, but based on their track record, something tells me that Coore-Crenshaw indeed created something special.

What are the best and second-best holes on the property, and why?

Davis: I like 16 at Bandon Dunes because of where it falls in the round, especially for match play. My next favorite are any of the par-3s at Bandon Trails.

Lewis: Totally agree with the esteemed Mr. Davis about the par-3s at Trails, particularly 17. There are also four or five holes on The Preserve that are just as good as the set on Trails. For a par-4, there are really too many at Pacific Dunes to choose from, but pressed I would go for the eye candy on 4 or 10.

Brown: My favorite is 16 at Old Macdonald — a 455-yard par-4 from the back tee. Architect Tom Doak describes the history behind the challenge well, citing the 17th at Prestwick and 3rd at National Golf Links of America. Finding the right side of the fairway off the tee to benefit from the angle for the next shot is difficult. Making the carry over the giant sand dune on the left for the second shot is intimidating. Let’s not keep score on this hole and just try to enjoy it instead. Second choice is 14 at Sheep Ranch — a 405-yard par-4 from the back tee. Choosing an interior hole away from the coast on a course with so many spectacular views might seem peculiar. The hole keeps me off guard and reconsidering the ideal strategy for my next play. A hill diagonal to the line of the tee shot creates disorientation and blind shots. Playing the hole down the far left side adjacent to the gorse gives you an open view and better angle into the green. No bunkers on the Sheep Ranch but the challenge at the green is no less formidable.

Halyard: Again, I view golf as valued entertainment, so my two favorites may differ from true players. The 1st at Bandon Dunes for the pure history. “This shot is landing on ground that almost got Keiser Sr. sent to an asylum for what was viewed as an insane idea.” Next for me is the 3rd at Old Macdonald, aka Sahara, up and over a massive dune. That shot wakes up even the most jaded. That sets the tone for the remainder of a spectacular round.

Hogan: The 17th at Bandon Trails is one of the best and most scenic par-3s in all of golf. It’s virtually impossible to stand on that tee and not take a photograph. The 4th at Bandon Dunes is the first walk toward the cliffs and always gets the blood flowing, but for me the 7th at Old Macdonald requires strength and precision as you navigate up the hill to that fantastically perched green overlooking the Pacific.