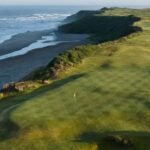 Even if you’ve never been to Bandon Dunes, chances are you’ve heard of Bandon Dunes. Odds are also decent that, at some point this week, you’ll be tuning in to watch the 2020 U.S. Amateur Championship, which is currently underway at the Oregon resort. Like what you see? Then read on. Here are seven things you should know about Bandon Dunes Golf Resort.

Where is Bandon Dunes?

Bandon Dunes sits on the southern Oregon coast, 80 miles north of the California border, and 250 miles south of Portland. The closest commercial airport is roughly 30 minutes up Highway 1 in North Bend, a small seaside city that is not to be confused, though it sometimes is, with Bend, a high-desert city some four hours east. The small city of Bandon, where the resort is located, was once nicknamed the “Storm-Watching Capital of the World.” There were local groups devoted to watching wild weather roll in off the ocean. Though Bandon isn’t known by that moniker today, the wind can still really blow along the coast here, fitting conditions for the links-land golf at Bandon Dunes.

What courses does Bandon Dunes offer?

OK … tell me more about these courses

Siblings in spirit, each 18-hole course has a personality of its own. Bandon Dunes, a layout with broad fairways, deep bunkers and expansive greens, starts inland, just behind the main clubhouse, and works toward the Pacific, with stirring front- and back-nine stretches along the coast. Pacific Dunes, the highest ranked of the resort’s courses, is a master routing that bucks convention. Its back nine opens with consecutive par-3s — two of four par-3s on the closing side. Old Macdonald takes its name from C.B. Macdonald, a looming figure in American golf architecture. And like Macdonald in his own Golden Age works, the course incorporates template holes into its routing, including an Eden hole, a Biarritz and a Redan, as well as a long par-4 patterned after the Road Hole at St. Andrews.

Bandon Trails, the only of the bunch that does not kiss up against the coast, makes up for its absence of water views with boundless shot variety and strategic demands. Ask a Bandon caddie or a single-digit golfer, and they’re apt to tell you that it’s their favorite layout on the property. Sheep Ranch, the newest of the 18-holers, is set on the smallest plot of land but occupies a mile of coastline, the most ocean front of the five layouts. There is not a single sand bunker on the course, but there are Pacific views on every hole and nine greens set hard along the bluffs.

Where do these courses rank in the U.S.?

Three of Bandon’s 18-hole courses reside on GOLF Magazine’s current roster of Top 100 Courses in the World, with Pacific Dunes at 24, Bandon Dunes at 80 and Bandon Trails at 87. Sheep Ranch, which recently reopened after a thorough remake of what was originally a scruffy 13-hole course, was not eligible for rating at the time the most recent World Top 100 voting was completed. But many believe it will be a strong contender for the next world ranking, as well as for GOLF Magazine’s list of Top 100 Courses in the United States, which comes out later this year. Time will tell.

How has Bandon evolved?

Developed by the Chicago-based businessman and golf junkie Mike Keiser, the resort opened in 1999 with a single golf course, Bandon Dunes. But even then, Keiser had something more in mind. It was his contention that while one course qualified as a curiosity, two courses made for a destination. The more golf you offered, the bigger the draw. The resort’s second course — Pacific Dunes — opened in 2001, followed by Bandon Trails in 2005, Old Macdonald in 2010, and Sheep Ranch in 2020. The Preserve and the Punchbowl opened in 2012 and 2014, respectively.

Bandon Dunes is the same vintage as Destination Kohler, the vaunted Wisconsin golf resort, which also opened in 1999 and will host next year’s Ryder Cup. But Bandon’s evolution has been different. Where Herb Kohler went all in on Pete Dye as the architect for his courses, Keiser has flipped through his Rolodex to tap a range of top designers at Bandon. David McLay Kidd, Tom Doak, Jim Urbina, Bill Coore and Ben Crenshaw have all left their imprint on the resort.

What other impact has Bandon had?

When Bandon Dunes was in its planning stages, skeptics scoffed at the idea that a golf resort could survive in such a lonely spot. The property’s success didn’t just silence the doubters. It helped reshape the industry. The phrase “remote golf” entered the lexicon, and a Field of Dreams approach became a guiding ethos, inspiring such off-the-beaten-path golf projects as Gamble Sands, Silvies Ranch and Streamsong, among others. The idea that if you build it, they will come no longer seems silly, so long as the golf is really good.

Have there been any other championships held at Bandon?

When it comes to staging USGA championships, this is not Bandon’s first rodeo. The resort also hosted the 2006 Curtis Cup (on Pacific Dunes); the 2011 U.S Amateur Public Links (on Old Macdonald and Bandon Trails); and the 2015 U.S. Women’s Amateur Four Ball (on Pacific Dunes). In this week’s U.S. Amateur Championship, the opening two rounds of stroke play were held Monday and Tuesday on Bandon Trails and Bandon Dunes. The match-play portion of the event, which runs Wednesday through Sunday, will be held on Bandon Dunes, the resort’s original course. Bandon Dunes was designed by David McLay Kidd, who grew up in Scotland, where match play is common, and who says he built Bandon Dunes with match play in mind. Now his course takes center stage — and on your living room TV, no less — this week.