Why Seminole’s members, from major winners to Bloomberg to Brady, reveal a lot about the club 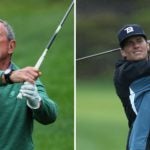 This is the second installment in a five-part Bamberger Briefly series about the TaylorMade Driving Relief charity event, to be played on Sunday afternoon at Seminole Golf Club, a landmark Donald Ross course in South Florida.

Seminole Golf Club is about the golfiest place in golfdom, or at least in high-altitude American golf. It’s both low key and supercharged. That’s a combo platter you cannot buy, but you can inherit it and nurture it.

Seminole’s president, Jimmy Dunne, knows 20 Tour players well and 30 Tour caddies better. Dunne took over from Tim Neher, who was close to Arnold Palmer. Neher’s predecessor, Barry van Gerbig, was, you could say, a Hogan disciple. Van Gerbig’s predecessor, George Coleman, Seminole’s longtime czar, backed the Hogan-Nelson team when Ben and Byron took on two amateur hot-shots, Harvey Ward and Ken Venturi, in a celebrated 1956 golf match at Cypress Point. To this day, at Seminole, it’s all Coleman this and Coleman that.

Seminole is old and Seminole is new. No member at Seminole has better dreadlocks than Larry Fitzgerald, the Arizona Cardinals wide receiver. Hogan once saw Nathaniel Crosby at Seminole with a hair dryer and said, “Nathaniel — hair dryers are for girls.”

Golf turns on subtle things, or at least it does at Seminole. The course will play short for Dustin and Rory and Rickie and Matt. (C’mon, Matthew Wolff: could you win a major or something so you could start traveling the world on a first-name basis?) There are three or four par-4s that the fellas will try to drive. The par-5s will play like par-4s.

Curves pack charm, wherever you encounter them. Seventeen is a par-3 with a back tee practically in one dune and a green almost in another. The wind blows off the ocean, left to right. It’s a draw shot if you’re a righty and a fade shot if you’re a lefty. It’s a par-3 that curves. Golf design got away from shape for too long but over time everything old becomes new again. The circular driveway at Seminole looks like it’s been there for 300 years but it’s actually only been 90. The pebbles, round and small and crunchy, are perfect.