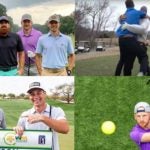 The Dude Perfect crew says they're "all in" on golf.

You’d be forgiven for thinking that there have been no widely consumed golf broadcasts since the Players Championship was canceled after 18 holes in early March. In fact, the DP Quarantine Classic Golf Shootout, which was streamed live on YouTube on March 18, has been viewed more than 3.8 million times. (That’s roughly 1.3 million more viewers than tuned in for the final round of the PGA Tour’s Honda Classic on NBC in February, and 2.8 million more than have watched the replay of the final-round broadcast of Tiger Woods’s win at the 2019 Masters.)

If you don’t spend much time on YouTube, it’s likely you’ve never heard of the DP Quarantine Classic, let alone watched it. The “DP” stands for Dude Perfect, a merry band of five thrill-seeking friends who, since their college days at Texas A&M a decade ago, have been entertaining themselves — and their 50 million-plus YouTube subscribers — with a steady diet of extreme sports challenges, ranging from bowling in parking lots, to converting field goals with baseball bats, to draining a 561-foot basketball shot from the top of Reunion Tower, in Dallas.

Golf, or some variation of the game, occasionally features in Dude Perfect’s stunts, most recently in the March event, which was their spin on an office golf tournament. To be clear, Dude Perfect’s workspace looks nothing like a traditional office. Their sprawling headquarters in Frisco, Texas, is a sports wonderland, with a basketball court, roller-hockey rink, turf soccer pitch, and, yes, putting green and golf simulator.

The format for the Quarantine Classic was a five-player, four-hole match (with holes ranging from 16 yards to 55 yards), complete with an announcer donning a Seminole visor (played by Kevin “Sparky” Sparkman) and a rules official in a yellow Web.com Tour caddie bib (played by Chad Coleman, Dude Perfect’s director of branded content and digital entertainment who was previously Callaway’s social-media manager). First prize was a can of DP-branded jalapeño bacon pinto beans, but the low stakes didn’t seem to deter viewers — the golf event was one of five Quarantine Cup live streams that drew millions of eyeballs and raised $330,000 for the American Red Cross and Feeding America. Remarked one viewer in the comments section, “This is the most golf I have watched in my entire life.”

The guys hit only flip wedges, chips and putts, but from those shots alone it was evident that at least a couple of them have some game, or at the very least an appreciation for the game.

“Oh yeah, we’re all in on golf,” Tyler Toney, who is 30, told me the other day. He was on a Zoom call to promote his posse’s new YouTube Originals documentary, Dude Perfect: Backstage Pass. Seated to his right was Garrett “Purple Hoser” Hilbert. Both of them had beards and their hats turned backward. “It’s one of the few games you can play at any age, with your dad, with your grandpa, with your kids,” Toney continued. “Very few sports allow you to go out and do that.”

Toney wasn’t just saying that because he was talking to a golf writer. He’s been playing golf for much of his life. When he was a kid, his parents would drop him off at the nine-holer at the Hank Haney Golf Ranch, in Dallas, where’d he while away hot summer days with his pals. He’s now a 5 handicap. Hilbert, who started playing his freshman year at A&M, is about an 11 (but not playing to it, he says), as is Cody Jones. The other two members of the DP squad — twin brothers Coby and Cory Cotton — are relative novices; they took up the game about three years ago and are happy to break 100.

Last summer, Dude Perfect took their act on the road, packing stadiums from Wichita to Winnipeg. If delighting their fans was job number one, checking golf courses off their bucket lists was a close second. “We literally built the tour around playing golf,” Hilbert said. The PGA Tour, with whom Dude Perfect has a marketing deal, helped out with tee times. Muirfield Village, Liberty National, East Lake, Pinehurst No. 2 — the list goes on. “We’re waiting on the Augusta National invite,” Hilbert said, only half-jokingly.

The DP guys have had some memorable playing partners, too: Bubba Watson and Viktor Hovland, in the Waste Management Phoenix Open pro-am (Toney’s tee shot on the raucous 16th hole trickled off the green, but since it was still early in the day, he endured only a smattering of boos); Jerry Pate and Mark Wahlberg at the Bass Pro Shops Legends of Golf event at Big Cedar Lodge, in the Ozarks; 18 holes in Austin with two-time Masters winner Ben Crenshaw. “We always tell our wives we got another once-in-a-lifetime opportunity to go do something,” Hilbert said. “And they say, ‘You guys seem to have a lot of once-in-a-lifetime opportunities.’”

A couple of years ago, Jon Rahm, the second-ranked player in the world, attended Toney’s birthday golf gathering at an out-of-the-way course in central Texas. When Rahm checked in and introduced himself, the incredulous attendant laughed.

Rahm proceeded to blitz the course, one-putting all but one green. He signed for a course-record 59. “It was unbelievable to watch,” Toney said.

Afterward, the club refunded their greens fees. “The guy said if his manager found out that he had charged a PGA Tour player to play, he’d be fired,” Toney said, laughing.

The Dude Perfect crew may relish hanging with Tour stars, but their own celebrity, on social media anyway, dwarfs any golfer’s. The DP Instagram account has 10.7 million followers — that’s more followers than the combined Instagram audience of Tiger Woods, Phil Mickelson, Rickie Fowler, Rory McIlroy and Paige Spiranac. DP has another 18 million followers on Facebook. But YouTube is where they make their hay. In February, their total video views crossed the 10 billion mark.

DP’s most popular golf challenges are their All-Sports Golf Battles, in which they play a hole with equipment from other sports: their first “shot” might be with a bat and ball, the second might incorporate a bow and arrow, followed by a frisbee toss. “We take every element out of golf other than the course and the hole,” Toney said. “It’s nice because it evens the playing field for athletes to come on with us.” The first of their golf battles has been viewed more than 82 million times. Their Extreme Weather Golf Battle, conducted on their office simulator and with such props as industrial-size fans, spotlights and shock collars has drawn another 39 million views.

Not all Dude Perfect’s golf feats are so outlandish, and some require considerable skill. In their golf trick shots compilation (24 million views), Hilder drains a 150-foot putt, and Jones picks off a target, like a marksman at a shooting range, with a 4-iron stinger. The highlight of the medley comes at about the 00:05:40 mark (see video below) when Toney steps up to the tee on a 130-yard par-3 at Gentle Creek CC in Prospect, Texas, with water fronting the green. “This is the hole in one!” he announces before stepping into his address, taking a quick waggle and swinging.

The ball takes flight, lands a few feet left of the hole and bounces a couple of times before disappearing into the cup. Hilbert and Coby Cotton, who are up on the green, react as if they’ve just had their Powerball numbers drawn, hooting and hollering and throwing their arms in the air. Toney tosses his club and dives into the pond.

From their jubilance, you’d swear it was Toney’s first swing of the day. It wasn’t, of course, but remarkably Toney did pull off the ace with less than a large bucket of balls. “That’s how it goes,” he said. “A lot of the shots that you think, ‘We’re going to be out here for three days, you end up getting in 30-45 minutes, and the ones that you think you’ll just step up and make it real quick end up taking the longest.”

Given the size of Dude Perfect’s audience, it’s no surprise that the PGA Tour — ever in search of younger fans — has cozied up to them (many other A-list brands have too, including BMW, Nike and the NFL). Among the Tour’s collaborations with Dude Perfect are meet-and-greets at Tour events. “The first time we did one we were shocked how many people showed up,” Hilbert said. “They had to shut the line down.”

Asked how the game generally could do a better job of attracting younger participants, Hilbert said, “It’s tough. Golf is rooted in this old-school way of thinking. It’s a gentleman’s game and very kind of proper, and on top of that it’s very expensive.”

He paused for a beat.

“But you’ve also got to keep the traditions of the game. It’s a tough one to figure out.”

There’s no easy solution, but Dude Perfect is undoubtedly doing its part to bring new eyes to the game, one YouTube subscriber and Instagram follower at a time.

Dude Perfect: Backstage Pass, a YouTube Originals documentary, is now available. You can watch it here.