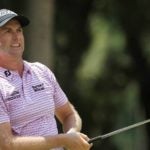 Webb Simpson fired a second-straight 65 to lead the RBC Heritage by one at the tournament's halfway point.

The second round of the RBC Heritage was suspended for inclement weather on Friday, with well over two dozen players left on the golf course, and some with as many as five holes left to play. But the biggest news of the day isn’t what happened during the round. Instead, fans and media are buzzing over the announcement of the Tour’s first player to test positive for the novel coronavirus: Nick Watney.

Here are three things you should know from Friday’s second round at Harbour Town.

After Watney reported that he was experiencing symptoms of the novel coronavirus, he was tested prior to his second round on Friday.

When that test came back positive, Watney withdrew from the tournament and the Tour began contact tracing for people Watney had interacted with during his previous days onsite.

Watney’s initial coronavirus test upon his arrival in Hilton Head was negative. So what happens now? You can read about the Tour’s positive test protocols here.

Webb Simpson leads the field by one shot

After firing a second straight round of 65 (6-under) on Friday, Simpson leads by one shot over Bryson DeChambeau.

Simpson carded nine total birdies on Friday, and only three bogeys. Though he missed the cut at last week’s Charles Schwab Challenge in Texas, Simpson has a good track record at Harbour Town, with three finishes of T16 or better in the last three years. He also finished as high as solo second back in 2013.

How the other big names fared

Bryson DeChambeau is once again in the mix, firing a second round of seven-under-par 64 to launch himself 14 spots up the leaderboard into T2 (11 under par overall).

On the flip side, some big names who are unlikely to make the cut when second-round play officially concludes on Saturday morning include Rickie Fowler (-3), Jason Day (-2), and Patrick Reed (E).