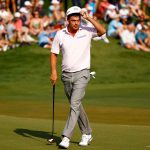 Keith Mitchell waves toward the crowd at the Wells Fargo Championship, where he holds the 54-hole lead.

We’ve reached the final round of play at the 2021 Wells Fargo Championship at Quail Hollow in Charlotte, N.C. Here’s everything you need to know to watch the action on Sunday, including TV information, tee times and more.

Keith Mitchell leads heading into the final round of play at the 2021 Wells Fargo Championship. The one-time PGA Tour winner holds a two-stroke lead over a jam-packed field at the 54-hole mark after a dazzling, five-under performance during Saturday’s third round. Mitchell is 9 under for the week heading into Sunday.

The group chasing after Mitchell is headlined by Rory McIlroy, who enters Sunday at the Wells Fargo looking to end a lengthy winning drought. The four-time major champion has not won professionally since the WGC-HSBC Champions in late 2019, and hasn’t won on the PGA Tour since the Tour Championship in August of that same year. McIlroy enters Sunday at 7-under and tied for second place with 2019 U.S. Open champ Gary Woodland. Further down the leaderboard, Abraham Ancer, Patrick Reed and Viktor Hovland will need big final round performances to vault themselves into contention.

Below is all the information you need to watch the Wells Fargo on Sunday, including tee times, TV and streaming schedules, and more!

How to watch Wells Fargo Championship Round 4 on TV

Golf Channel and CBS will carry the final round of the 2021 Wells Fargo Championship. Coverage begins at 1 p.m. ET on Golf Channel, and continues from 3 p.m. ET to the completion of play on CBS.

How to stream Wells Fargo Championship Round 4 online

You can stream the final round Golf Channel TV coverage of the 2021 Wells Fargo Championship on golfchannel.com. Fans can also view Featured Group coverage of the opening round all day Sunday via PGA Tour Live with a subscription.