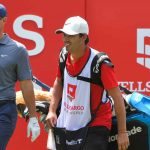 Rory McIlroy is in the hunt at the 2021 Wells Fargo Championship.

On Saturday at the 2021 Wells Fargo Championship, players will look to put themselves in position for a run at the title on Sunday at Quail Hollow. Here’s what you need to know to watch the third round.

After turning back the clock with a seven-under 64 on Thursday, Phil was less than thrilled with his four-over 75 follow-up on Friday. But the good news is, Mickelson is still very much in it, only three shots behind a trio of co-leaders: Gary Woodland, Matt Wallace and Patrick Rodgers, who are six-under overall.

Rory McIlroy also made a significant move (luckily in the right direction), leaping 68 spots up the leaderboard into T5, thanks to a second round of five-under 66, which was one of the best rounds of the day. Rory has a positive history at Quail Hollow. Not only is he a member, he’s also won there twice.

Other lurking big names include Bubba Watson (-3), who will play with Phil on Saturday afternoon, recent winner Stewart Cink and Patrick Reed, both two-under, and Justin Thomas, who won the PGA Championship at Quail Hollow and is six shots back at even par.

Below you will find everything you need to know to watch the third round of the 2021 Wells Fargo Championship on TV or online.

How to watch Wells Fargo Championship Round 3 on TV

Golf Channel will air the early third-round coverage from 1-3 p.m. ET, with CBS taking over from 3-6 p.m. ET.

How to stream Wells Fargo Championship Round 3 online A timeline of Brooks Koepka vs. Bryson DeChambeau: How it started, how it's going

The big difference between elite amateur golf and pro golf, according to an ex-college star