Jon Rahm’s caddie: What the … are you doing? 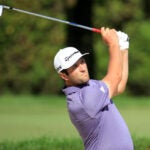 Jon Rahm took five frustrated steps onto the 5th green at Olympia Fields Country Club. The wind had knocked down his approach shot. He was 43 feet away from the hole and 43 feet away from a third straight birdie during last weekend’s third round of the BMW Championship. He reached down with his right arm and grabbed his ball, and his caddie, Adam Hayes, reached out his left hand to take it.

Rahm hadn’t marked. He was now holding his ball, and his pocket was holding his marker. At least one needed to be on the ground.

Rahm froze. He didn’t say a word. Hayes said five. And implied another.

“My head’s turning as he’s picking the ball up, and I immediately saw that his coin wasn’t down, and I probably said a word out, you know – what the (blank) are you doing?” Hayes said this week on SiriusXM PGA Tour Radio.

“And then you know, I love messing with my guy a little bit. He just like froze. It was one of those street performers or whatever. They just like, uh, he like couldn’t move.”

“Looking back on it, it was pretty funny, Hayes said on SiriusXM PGA Tour Radio. “And I was really proud of him – and he said this also – he hit a poor first putt there and then he had to make a 6-footer for bogey. You always think of these times in tournaments, right, that are these really meaningful moments, and that was, in a roundabout way, was probably really a meaningful moment that he made that putt and kind of kept some momentum going.

“He even said, it happened, and it kind of, whoosh, went right through his mind and he forgot about it.”

On the first hole of the playoff, Rahm curled in a 66-footer for another birdie and the victory.

“I was like, that extra shot cushion would be extremely nice right now, I’m not going to lie,” Rahm said Sunday. “But, at the same time, it happened. I don’t know if I would have won had it not happened. It kind of made me mad at myself, and I just went on with my focus after that and was able to play amazing golf and stayed aggressive. Maybe if I hadn’t, I would have two-putted and maybe stayed complacent. I don’t know because I had such a good start. I can tell you after that two-putt, making that 6-footer for bogey, I was like, ‘OK, that’s it, no playing around, go.’ That’s kind of what mentally did it for me.”