How Dustin Johnson hit the most bizarre shot of the week 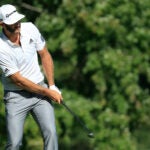 Dustin Johnson led after three rounds at the PGA Championship. He won the Northern Trust last week. He was tied for the lead after four rounds of this week’s BMW Championship. Over the past month, little has gotten in his way.

His little tee did Thursday.

Johnson was standing over his tee shot on the 180-yard, par-3 6th hole at Olympia Fields Country Club during the first round of the BMW Championship. His ball was not standing on its tee. Johnson hit the ball through the tee, not the ball off the tee, NBC analyst Jim “Bones” Mackay said during Sunday’s broadcast.

Johnson’s shot went about 22 feet right of the pin, and he ended up with a bogey.

“When Dustin was playing this hole on Thursday, he teed up his 6- or 7-iron and his ball actually fell off the tee,” said Mackay, who saw the shot as he was also working as the caddie for Justin Thomas, one of Johnson’s first- and second-round playing partners. “He never noticed it, went ahead and hit the shot anyway, with the tee getting between the ball and the clubface and hit it out to the right and made a bogey.

“He was told afterward that his ball had fallen off the tee, and it took him about five seconds to get over it. As always the case with Dustin, one of the most resilient guys in the game.”

Within a second of hitting, and before the ball landed, Johnson walked off the tee box and toward Mackay and Thomas. Johnson also appeared to say something.

“Dustin didn’t like that one quickly. And I don’t know why,” one of the announcers on the PGA Tour Live broadcast said.

Johnson pitched his second shot 5 feet past the hole. He missed the par putt and finished with a 4.

During Sunday’s fourth round, Johnson made a 43-foot putt on the 18th hole to tie Jon Rahm atop the leaderboard and make a playoff, then Rahm made a 66-footer on the first playoff hole to win. Johnson’s bogey on Thursday looked bigger on Sunday. Rahm would know. On Saturday, he picked up his ball before on the 4th green before marking and picked up a one-stroke penalty on his way to a bogey of his own.

“That’s almost up there with Rahm forgetting to mark the ball,” NBC analyst Roger Maltbie said of Johnson’s tee-less shot.