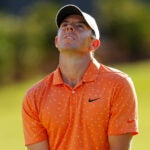 Rory McIlroy reacts after missing his par putt on the 18th hole at East Lake Golf Club on Saturday.

Rory McIlroy hit his first shot on the 18th hole at East Lake Golf Club 371 yards. It was his longest drive through his two rounds at the Tour Championship.

He hit his second shot on Saturday about 30 yards. Into the water about 15 yards in front of him. Topped. It was his worst shot through his two rounds. It’s up there – down there? – with all of his other rounds, too.

McIlroy had been even-par and three shots out of the lead entering the 574-yard, par-5 18th. He ripped his drive through the fairway. He was 209 yards away from the hole, but his ball was buried in the rough.

“This is a bad lie,” an announcer said. “It’s going to take all of his power and strength to get this to carry.”

It needed a bit more.

The ball went about a yard in the air before going straight to the bottom of the lake. McIlroy turned around, shook his head, turned back and winced.

“You just don’t see that very often,” one announcer said.

“As in ever,” another announcer said.

McIlroy would drop, and he hit his third shot and fourth stroke to about 35 feet. To add insult to penalty, his par putt rimmed out of the cup. He finished with a six.

“Yeah, the lie was sort of iffy,” McIlroy said after the round. “My biggest concern was trying to carry the first bunker on the right there, and I knew I needed to hit it really hard and I swung hard at it, and I got it just – I got it maybe like right in the middle of the ball and I didn’t get – I felt like if I tried to sweep it, it would be better, and I just sort of came up on it a little bit.

“Probably in hindsight trying to take on a little bit too much. So yeah, and then it would have been nice to get away with a par. It wasn’t to be.”