‘Worst lip-out you could ever get’: Jordan Spieth shocked at Ryder Cup 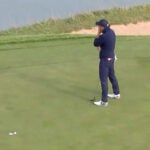 Jordan Spieth on Saturday, after his lipped-out putt on the 13th hole at Whistling Straits.

Jim “Bones” Mackay, the longtime caddie of Phil Mickelson and no stranger to Ryder Cup thrills, said from behind the 13th green at Whistling Straits that if Jordan Spieth’s 7-foot, 10-inch putt for birdie dropped Saturday afternoon, “you’re going to hear a massive roar.” And if he missed during his fourball match? “Of course, you’ll hear the groan,” Mackay said on the NBC broadcast.

In one breath, the hundreds gathered around the green did both.

With a birdie putt to move his fourball match against Europe’s Jon Rahm and Sergio Garcia to all-square, Spieth hit his ball firmly, it touched the left edge of the cup and disappeared nearly completely, only to pop back up on the right side of the hole and eventually finish where it started. A 360-degree lip-out. And a par.

“That’s the worst lip-out you could ever get,” analyst Paul Azinger, himself a former Ryder Cup captain, said on the NBC broadcast.

If you believe that’s hyperbole, consider the reactions at 13.

Spieth? He put his left hand to his mouth. He’d eventually wait a second to see if the winds off nearby Lake Michigan would push it in, then plucked it off the ground with his putter and walked off the green.

Rahm and Garcia? From left of the green, Rahm leaned forward and shouted, “Ohhhh!” Garcia put his left hand behind his head.

And the crowd? It went something like this: “YEA … OHHHHHH!” They’d continue that scream in an effort to try to create enough breeze to blow in Spieth’s ball.

“It goes in the left side and all the way around. Unbelievable,” analyst Gary Koch said on the NBC broadcast. “Absolutely cannot comprehend it.”