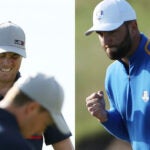 HAVEN, Wis. — There’s nothing better than a little gamesmanship at the Ryder Cup, and we were treated to a delightful little dose of it early on Day 1 at Whistling Straits.

It came in the first match of the day, in a duel between the two teams’ respective spiritual leaders: the United States’ Justin Thomas and Jordan Spieth, and Europe’s Jon Rahm and Sergio Garcia.

On the sixth hole of a match in which only one of the first five holes was halved, Rahm lagged a putt to 2.5 feet on the 6th hole. He was, naturally, expecting a gimme. But Thomas and Spieth, already in the hole for par, forced team Rahm/Garcia to make the short putt to halve the hole (which they did).

Perhaps the putt was justifiably outside the circle of friendship for an all-square match, but it still didn’t sit well with Rahm.

“A lot of times where people are going to try to play mind games,” he said. “It’s all part of the Ryder Cup.”

The forced-make gave Rahm an extra bit of motivation and fueled the Spaniards to pull away from their American counterparts. Rahm knocked in a 12-footer and 15-footer on his next two holes, then after a par on the 9th, he holed a three-footer on the 10th to send his side three-up. That’s how they ended the match to secure Europe’s sole point from the morning session.

“I feel like it did put a bit of an extra thought in our mind,” he said. “I was thinking, I’m not going to give them the chance to have to give it to [us] or not.”

The World No. 1, injected with a fresh dose of confidence and added sense of motivation? Perhaps better to just give him the putt next time.