Phil Mickelson, even without a club, is the most popular golfer at the Ryder Cup 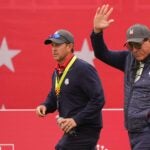 Phil Mickelson won't have a club this week, but he's still making an impact.

The fairways are in chutes, here at Whistling Straits, and the fans are on high, looking down at the players. But one guy — one assistant captain — was getting the most attention.

Fan to Phil, in the playful rhythm of Get a room: “Get a club!”

The fan’s point is that Phil Mickelson can still play. He is, after all, the reigning PGA champion. (Kiawah, May, over Brooks Koepka, et al.) Before Mickelson, the last PGA Championship winner not to make that year’s Ryder Cup team was Rich Beem in 2002.

And this, from a fan so loud that everybody — Steve Stricker, Bryson DeChambeau, all the caddies — could hear him: “Our future captain, Phil Mickelson!”

Only Mickelson could engender such an odd shout-out.

In the long and growing roster of Ryder Cup vice captains (once known quaintly as assistant captains), there has never been one whose presence of a Ryder Cup course has generated anything like the excitement that Phil Mickelson has these past few days here.

Mickelson is one of five assistants on the American roster. Then, of course, there is the actual captain, Steve Stricker. So six managers. And 12 players. Eighteen people. Just so you have it in one place, here they are, and you tell me what name jumps out at you as Biggest Personality.

The ital, like the eyes in the old Tom Petty song, gives it away. Of course Phil is the player with the biggest personality.

On Thursday, four American players went off the first tee together for a nine-hole practice round: Justin Thomas and Jordan Spieth, later announced as a Friday-morning pairing, and Scottie Scheffler and Bryson DeChambeau, likely a Friday afternoon pairing. Phil walked with the group. Phil is Bryson’s minder. He has other responsibilities, but Mickelson’s main task is to keep Bryson’s head and body where it needs to be.

If there’s anybody up for the task, it’s Mickelson, a plus-four talker, a physically impressive person and one of the notable outside-the-box thinkers in golf today. In his own way, DeChambeau checks off those three boxes, too. But even DeChambeau must recognize the imbalance of power. Phil Mickelson is one of the most accomplished golfers ever. DeChambeau is starting out.

The other day, in a practice round, DeChambeau was playing a pitch shot out of a heavy lie. Mickelson was standing behind him, watching intently. DeChambeau played the shot and Mickelson said, “If you just went at it a little bit harder.”

Kind of a head-scratcher, but interesting, too.

“They get along great,” Stricker said late Thursday afternoon. “Phil finds Bryson very interesting and he’s trying to learn things from Bryson I think. They have this rapport, and they enjoy being with one another. So I see those two guys being in each other’s pocket for the rest of the week.”

Mickelson, surely, will be in other pockets, too. Because, really, there aren’t enough pockets in the world for Phil Mickelson.

There was a small army walking with Thomas, Spieth, Scheffler and DeChambeau on Thursday, in a cool wind. In addition to the players, there were caddies, various support staffers, Zach Johnson and Steve Stricker. It was a good scenario for Phil, constantly on the lookout for somebody to hear his thoughts about something. Phil could talk to Michael Greller, Jordan Spieth’s caddie. To Justin Thomas. To Bryson. To Bryson’s caddie. To Bryson’s manager. And on it goes from there.

The person he spoke to most was Stricker. They’re made for each other. Phil’s a talker. Stricker is a listener. But, as any listener will tell you, there’s only so much listening you can do.

When the players were on the eighth green, Mickelson and Stricker were about 20 feet in front of it, chatting. Johnson was with them. You almost never see this: Johnson and Stricker sat down on the grass. Phil stood beside them, towering over them, his words cascading in their direction, his left hand keeping rhythm with his words.

“You know, it was unknown for a while whether he was going to be a part of this team as a player or a vice captain. But I knew I wanted him here. He’s great for the team and he’s great in the room. He talks all the time. He talks.”

In a manner of speaking, this is Mickelson’s Ryder Cup team, as every American Ryder Cup team since 2014 has been his. It was in 2014, after the American loss to the Europeans in Scotland, that Mickelson made a not-so-subtle and public criticism of the U.S. captain, Tom Watson. Those comments — 90 seconds that changed the world — at a post-loss press conference led to a total revamping of the manual by which the PGA of America approaches the Ryder Cup. Mickelson led that revolution. It’s his to this day. Steve Stricker was right there, that day at Gleneagles. He was one of Watson’s assistant captains. All of golf is intertwined. Nothing happens in a vacuum. There’s always a domino effect.

Tiger Woods was destined to be an assistant captain this year. He and Stricker have always had a good relationship. But the serious injuries he sustained in his Feb. 23 car crash prevented him from attending this year’s Ryder Cup. Tiger is a commanding presence in any room he is in. His absence allows Phil to be more Phil.

Mickelson has done no interviews this week, mindful that he doesn’t want to do anything to undermine Stricker’s leadership of the team. But as fans called out his name at a regular rate, he responded with his usual sign language, raising a thumb to mid-chest height.

One fan, from New Jersey, Corey Wescoe, stood with two other buddies, wearing a blue T-shirt with a larger-than-life photo of Phil’s head on their chests. “We’ve gotten the thumb before,” Wescoe said, “but that was the most emphatic.”

Maybe Bryson will be on that team. Maybe Collin Morikawa. Maybe some players whose names we don’t even know.

Morikawa was asked about Mickelson the other day, not as a Ryder Cup ping-pong player — that’s so 2004 — but as a story teller.

“I’m 24 and I have like a fraction, if not zero, of the stories that Phil Mickelson has,” Morikawa said. “Phil obviously is a great storyteller. I don’t know if he’s telling the truth at this point. You get to a certain age and you kind of just make stuff up, and I have a hard time believing some of the stuff I’ve heard, but it is what it is.”

An interesting phrase, that last one, one that Tiger uses regularly. With Phil, it often doesn’t apply. With Phil, things are more than what seem to be. He’s large, in every sense. He’s lived a large life. He’ll continue to do so. He’ll be a large presence at this Ryder Cup. He can’t not.