Is arm-lock putting actually better? I tested Bryson DeChambeau’s putter to find out 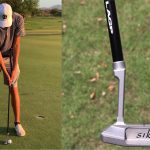 Arm-lock putting is one of the most controversial topics in the world of golf equipment right now, especially in the wake of Xander Schauffele’s recent comments. While Schauffele says he thinks the method of arm-lock putting should be banned, he still made the change due to the performance benefits he saw with his putting coach.

Prior to the U.S. Open, Schauffele joined Bryson DeChambeau, Webb Simpson, Matt Kuchar, Will Zalatoris and Keegan Bradley on the growing list of names using an arm-lock-style putter on Tour.

If you listen to the players, or the firestorm that’s come out against arm-lock putting, you may think it is the ultimate cheat code. Just nestle the elongated grip up against your forearm and the ball should go in the hole, right?

Surely it can’t be that easy, but I wanted to find out.

Like many of you reading this article, I struggle immensely on the greens. As a former collegiate golfer and current 2 handicap, I can still get the ball around the course from tee to green fairly well, but once the ball gets on the putting surface, it all goes out the window.

I’m now officially a poor putter of the ball, and years of three-putting and missed three-footers has taken its toll on my scores and mental game.

Can arm-lock putting help someone like me; someone who’s completely lost? I recently put an arm-lock putter to the test to find out. Below, I’ll take you through the putters I tested, my process, the results and a few takeaways. Let’s dive right in.

DeChambeau is one of the most well-known golfers to employ the method of arm-lock putting, and he’s been at it for years. He’s not only refined the stroke itself, but with the help of his partners SIK Golf and LA Golf shafts, he’s developed a putter that suits his style perfectly. It has an extremely thick and stiff graphite shaft, a hosel designed to fit the shaft, a putter face designed to launch the ball consistently and a half-moon JumboMax grip with the flat side facing the target.

To find out whether arm-lock works for me or not, I got my hands on a replica of the putter DeChambeau uses. For the purposes of testing and comparison, I also tracked down a 35-inch version of the SIK putter he uses, and pitted them both against my current gamer.

So, here’s a look at the three putters I used in this test.

In order to gain a full understanding of how these putters actually perform against each other, I wanted to combine scientific data with on-course feedback.

For the scientific aspect, I went to our 8AM Golf sister company True Spec Golf in Scottsdale to utilize its flat-greened putting platform. There, I hit 10 putts with each putter from both 5 feet and 10 feet. To track the data from those putts, I used Foresight Sports’ Essential Putting Analysis on its GCQuad launch monitor unit.

For the “on course” testing, I set up a 9-hole course on the putting green at TPC Scottsdale (Champions Course). I hit three putts from each of the various distances (20 to 60 feet) and changed targets with each putt (right-to-left breakers, left-to-right breakers, uphill, downhill, etc.). Also, to avoid any bias, I alternated the order in which I hit each putter. For example, on hole 1, I hit my gamer first, then the Bryson arm-lock, then the SIK 35-inch. On hole 2, I hit the Bryson arm-lock first, then the SIK 35-inch, then my gamer. And so on.

My thinking? That the indoor testing analysis provided insight to performance on short putts, and the outdoor testing provided a look into how each putter performed on lag putts.

I know, I know, get to the numbers already.

Below, I’ve charted data from 5 feet and 10 feet in six crucial categories (Spin, Skid, Face Dynamic Loft, Path, Face Angle and Push/Pull), along with a few thoughts following each table.

Spin: To get the ball rolling as fast as possible on the green, the goal is to get as much forward spin as possible. Clearly, with both my gamer and the Bryson replica, that didn’t go great. The SIK 35-inch putter, though, provided significantly better spin numbers. This may be due to the company’s face grooves and DLT (Descending Loft Technology), but there are a lot of variables at play here.

Skid: You want the ball rolling, not skidding, in order to have the best chance at matching intended line and speed. While all of these numbers are abysmal, in my opinion, both SIK putters provided significantly less skid than my gamer.

Dynamic Loft: This stat measures the amount of loft delivered to the golf ball at the point of impact. With only 1 degree of loft deviation, the Bryson replica was most consistent in terms of loft delivery. Obviously, my hands are much further forward in the arm-lock-style stroke, making the dynamic loft lower in general.

Face Angle: This is one of the most significant parameters of the test because it measures how consistently you bring the putter back to square. While I tend to be open with my face at impact regardless of putting style, this shows the Bryson replica had only 0.5 degrees of face angle deviation. That means I’m most consistent with my face angle using an arm-lock putter from 5 feet.

Push/pull: This measures how far right or left the golf ball goes. No surprise here, I tend to push my putts, so all of the numbers are right of the target. The Bryson replica, however, was both closest to the center-line and had the least deviation.

Spin: A bit better on the spin numbers overall here, but the obvious winner is the SIK 35-inch putter. While it had a bit more spin deviation than my gamer, we’re looking for more forward spin, so 65F is top dog.

Skid: Yes, I know, these aren’t great numbers. In terms of this test, though, the Bryson arm-lock provided the least amount of skid, and my gamer was the worst in this category.

Dynamic Loft: My gamer had the most dynamic loft on average, which doesn’t necessarily make it best, but it did have the tightest deviation. A quick note about the SIK putters here: I tend to hit the ball low on the face of the putter, and SIK’s DLT means the lowest portion of the face has the least amount of loft. This could be a reason why their dynamic loft is lower. Also, the static loft of the SIK 35-inch putter is much less than my gamer (3.5 degrees vs. 4.75 for the gamer).

Path: Interestingly, my path with the Bryson armlock was 1.3 degrees left of target on average. This could be a result of the difference in ball position using arm-lock; it’s more forward in my stance, which could mean the path is starting to move more leftward. Either way, the SIK 35-inch had the least deviation, and my gamer path was closest to 0.

Face angle: While I was most consistent on face angle with my gamer, the SIK 35-inch was perfectly square on average, and the face of the Bryson arm-lock tended to point most leftward.

Here’s where things really took a turn for the Bryson arm-lock putter. Let’s take a look at the results.

Gamer: On average, my putts with the gamer finished 10.2 inches long of the target, and there was a 20.2-inch standard deviation from the average.

Bryson armlock: On average, my putts with the Bryson arm-lock finished 10.9 inches short of the target, and there was a 22.3-inch standard deviation from the average.

SIK 35-inch: On average, my putts with the SIK 35-inch putter finished 9.6 inches long of the target, and there was a 20.8-inch standard deviation from the target.

Based on these 9 holes of testing, it was clear I performed worse using arm-lock than the two shorter putters. Of course, this was hardly the most scientific test of lag putting, but the data did reflect my lack of comfort using an arm-lock putter. Without the ability to use my hands and wrists to gauge distance with the arm-lock, I was basically just guessing.

The numbers are the numbers, but your perception of the data may be different than mine.

To me, I would say this test shows that arm-lock putting is a viable option if your concern is with stability and consistency on short putts. Prior to this test, I had never used an arm-lock putter for 18 holes, and I’ve never received a lesson in how to optimize the arm-lock putting method. But, I did see some significant improvements in my consistency and comfort level on putts from 5 and 10 feet.

On lag putts, though, my performance with the arm-lock suffered. In order to see arm-lock putting as a true candidate for my new gamer, I would need weeks or months worth of practice to dial in my feel. Or, as GOLF’s Managing Equipment Editor Jonathan Wall suggested on our Fully Equipped podcast, I could go with a two-putter setup; short putter for long putts and arm-lock for short putts. He may be on to something.

When looking at my steel-shafted gamer putter versus the graphite-shafted SIK Golf 35-inch short putter, there were a few significant areas of note as well. First, the ball simply rolled better off the face of the SIK short putter. There was more forward spin and less skid, which means there was a truer roll. Also, I wasn’t pushing putts as badly to the right with the SIK 35-inch putter as I did with my gamer. Of course, there are many variables between the two short putters (loft, lie angle, face technology and weight), but better direction and consistency could also be due to the difference in shafts (steel versus stiff graphite).

So, what’s the takeaway from all this? Surely you don’t care whether I end up switching to arm-lock or not, or whether I stay with my gamer or change to the SIK 35-inch putter.

The true takeaway is that you should absolutely conduct testing of your own! Subtle differences in length, grip, shaft and head design can have a truly impactful affect on how many putts you have throughout a round. No one likes three-putting every hole; trust me, I would know.

While you may be most familiar and comfortable with your current gamer, it’s unlikely that the putter you’re using now is the best fit for you. My advice is to get with a trusted fitter or teaching professional and go through a proper putter-fitting. Or, at the very least, conduct a similar test to the one I did for yourself. You won’t know if there’s something better out there if you don’t try. How much inventory sits inside a Tour equipment truck? The answer ($$$) will surprise you

These 5 pieces from FP Movement are trendy, comfy and perfect for golf