Vestgate, a grumpy pairing and the best four-putt of all time | Rogers Report 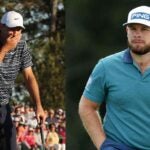 Wow, I’m going to miss Jim Nantz saying that on the Masters broadcast. What a week we just had. From Frankie Fleetwood stealing the show on Wednesday afternoon at the Par 3 Contest, to Scottie Scheffler slipping on the green jacket, it was another very successful Masters week.

There’s a handful of things I’ll remember: Tiger’s return, Stewart Cink’s ace and coming down with Covid during the busiest work week of the year, to name a few. Before the post-Masters letdown really begins, let’s take a look at some of the viral moments of the week.

Whether you’re going as a patron or a player, you want to look good when you head to Augusta National (read: I, Claire Rogers, spent weeks planning my outfit ahead of my Masters Monday trip in 2017, only for it to get rained out). Anyway, Tiger showed up in a hot-pink mock neck, which I can only assume was a nod to Augusta National’s azaleas.

And he killed it. Warning: Attempt to pull this look off at your own risk. It’s best suited for a 15-time major champion.

Next up we have Tony Finau. This Masters Saturday ‘fit created a great divide on Golf Twitter. Some loved it, others hated it and a few even asked “why care?” And to them, I say: This is the Masters. We’re allowed to be invested in each and every aspect of the week, including (but not limited to) Tony Finau’s pullover, which appears to be on clearance at local stores.

Before I provide my take here, you should all know that I am not the most fashionable. I do, however, spend a lot of time on golf courses, and I’ve gotta say I’m a fan of the pullover. The deep orange, navy and hot pink might not have been be my first choice of colors for this item, but I like the look of the top itself if. And I’ve gotta respect Finau for being bold with his fashion choice.

Another clothing comment! Many people may think Scottie Scheffler‘s game stole the show on Saturday at Augusta National, but it was actually his puffer vest. Upon first glance, this is your average golf vest. But Scheffler could not decide if he wanted it on or off throughout the round. Some golfers are committed to wearing an extra layer in between shots, but it appeared Scheffler was committed to taking that thing on and off dozens of times throughout the round.

I can’t relate to the spectacular golf Scheffler played over the weekend, but I do know what it’s like to worry that your outfit is being overshadowed by a jacket, so I can kind of empathize with the Masters champion here. And shout out to Scheffler’s caddie and right-hand man, Ted Scott, for not only carrying a golf bag all day but carrying the vest whenever Scottie decided he didn’t want it on.

Lucky for Scheffler, the week was about a jacket and not a vest.

There are a million parts of Tiger’s week we could dissect here, but let’s keep it simple and take a look at what he had to say over the weekend.

Tiger Woods shot a 78 and … joked about it? I’m here for this! We can all relate (some more than others) to hitting too many putts throughout a round, and to see an 82-time PGA Tour winner chuckling about it after his round is refreshing.

OK, on to Sunday.

I’d like to thank Tiger for this one. We didn’t know until the last minute if Tiger was playing in the Masters, so him committing to playing in the Open just saved us, and whoever tracks his private jet, a lot of guessing.

I could not get over how calm 25-year-old Scottie Scheffler was all week at Augusta National, especially on Saturday on No. 18 and all throughout Sunday. I began to question if this guy is even human, and then we got this extremely candid post-win presser.

The World No. 1 cried like a baby he was so stressed out! Scheffler also mentioned that he had a stomach ache the whole second half of the week. As someone who didn’t sleep the night before a round at Seminole due to nerves, this honesty from Scheffler was extremely refreshing. Afternoon tee times are great, but they’re also stressful, and Scheffler proved it, even if we couldn’t tell until after he won on Sunday.

I am a bad putter, and if you are too, I’m about to make you feel a little better. Let’s start with Kevin Na.

A five-putt! We don’t see that very often. Well, you might see it every so often if you’re playing with me, but definitely not a professional event. Mr. Walk-in himself five-putted at Augusta National, and I want you to remember that next time you feel ashamed for not bringing your A-game to a company outing.

Next up is the fact that Tiger Woods and the World No. 1/ Masters champion both four-putted at Augusta National over the weekend. There are 16 PGA major championships between Tiger and Scheffler. For the sake of us feeling better about ourselves, let’s disregard the fact that Augusta’s greens are ridiculously hard and accept the idea that sometimes, the world’s best players are just like us.

I truly believe that there is no better story in golf than four-putting to win the Masters. Was it difficult, perhaps nearly impossible, to watch? Yes! But when it was all said and done on Sunday evening, Scheffler represented not only the best players in the world, but the common men and women everywhere who struggle on the greens when the pressure is on.

Picture this. It’s a beautiful Sunday morning in the early spring. The sun is out, (artificial) birds are chirping, and you’ve made the cut at the Masters. You’d be in a decent mood, right?

Wrong. Billy Horschel and Tyrrell Hatton may have been the grumpiest players to ever tee it up at Augusta National on Sunday. Horschel’s struggles at Augusta are well-documented, and he took to social media to apologize for his behavior there last year.

Tyrrell Hatton’s emotions on the course are also well-documented, and even became a bit in the DP World Tour’s hilarious Angry Golfers video from last year.

Anyways, if you like watching players lose their cool on the course, this was a dream pairing.

How about that! In the spirit of full transparency, I would like to go on the record and say that this pairing gave me life on Sunday. Final rounds can feel slow when you’re waiting for the leaders to tee off, but thanks to Horschel and Hatton, this was not the case.

And it doesn’t stop there! Hatton had a lot to say after his round. Part of me is worried he won’t be invited back to Augusta National after this, and the other half of me just feels glad we got to witness this on Sunday.

Rory McIlroy has had a tough go at Augusta National, but that all changed on Sunday afternoon when he fired a final-round 64. The whole thing was incredible, but I’d like to focus on his hole out on 18.

This was truly the perfect end to Rory’s week. And his celebration was hilarious.

He seemed to be torn between jazz hands and arms up in the air, so he went with both. The sheer excitement is amazing. And then to make the whole thing even better, Morikawa holed out, too!

You can’t make this stuff up! And it was just so, so great to see a happy McIlroy at Augusta National. In no other sport do competitors get this excited for each other, which is exactly why I love this game so much.

And finally, we have some other great moments from the week. First off is Autumn Solesbee‘s Drive, Chip and Putt celebration party.

Look out, Scottie Scheffler. Her menu is going to be tough to compete with at next year’s Champions Dinner. And then we have this super wholesome moment between Scheffler and his father.

I’d like to make my parents this proud one day. And finally, we have this picture of a couple of junior golfers who would grow up to become the kings of Augusta National.

I’ll see you all next week!