Tiger Woods’ plane went to Augusta, then the Internet lost its mind 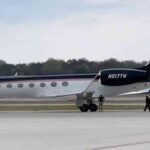 When I wrote yesterday’s Rogers Report, I fully intended to go a week without another one.

Folks, this emergency Rogers Report is time-sensitive and absolutely cannot wait a week. Tiger Woods is on the move.

Tiger’s yacht may be called “Privacy,” but there is literally nothing private about the way this man travels. Fans have tracked the 15-time major champion’s $20 million, 155-foot yacht for a few years now. But things reached a new altitude on Tuesday morning when Tiger’s private jet was spotted heading toward Augusta.

If you’ve been living under a rock, perhaps you’ve missed the rampant speculation (read: fanboying/girling) over whether Tiger will tee it up in the Masters next week. To date, the speculation has been fueled largely by guesswork. Early last week, the rumor mill centered upon the Masters website, where Tiger was still listed in the field. Then over the weekend, a Zapruder-style film leaked to social media of him teeing it up at the Medalist.

Fast-forward to this morning, when word got out that Tiger’s private jet was en route to Augusta National. (I can’t believe I just typed that sentence. How does “word get out?” Who is looking at these things?)

I’m not sure my family cares about my travels as much as golf twitter cares about Tiger’s. I can actually say that with confidence, because I’ve arranged to be picked up from the airport by a sibling on numerous occasions only to find myself in the backseat of an Uber upon landing.

Shout out to Radar Spots, who tracked Tiger’s entire flight from Florida to Augusta, and to Eureka Earth, who managed to snag a video of Tiger’s plane landing.

And because golf twitter never disappoints, we had some great takes on this whole thing.

Is it weird that people are tracking Tiger’s plane? Yes! It’s one of those things that feels illegal but isn’t. And according to a source (The Internet), Tiger’s good pal Justin Thomas might be joining him at Augusta today.

Nothing gets golfers excited like Tiger Woods and the Masters, so while this whole thing is a little strange, I’m just excited about the possibility (dare I say likelihood?) of Tiger playing next week. Twenty-four hours ago, I was 50 percent sure Tiger will play in the Masters. I’ve taken all of this private-jet information into account and am now a comfortable 58 percent sure. Hey, I’ll take it!