In one magical round, Rory McIlroy rejuvenated his grand slam hopes once again 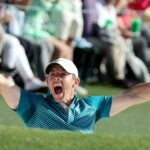 Rory McIlroy holed out for birdie on the final hole of his 2022 Masters.

AUGUSTA, Ga. — Finishing in second place never felt this good. It’s also never looked this fun. But for so many reasons, finishing second was damn good for Rory McIlroy Sunday at Augusta National.

McIlroy’s Masters ended three shots short of a playoff with Scottie Scheffler, golf’s current immovable object. It was a result you could have predicted at the beginning of the week, but never on Sunday morning, when McIlroy began 10 behind the lead.

What’s nice for us, as it is for McIlroy himself, is we will not leave this Masters thinking about those three strokes. Rather, we’ll be thinking for many, many weeks to come about the one stroke he took from the greenside bunker on 18, and the 63 others that preceded it during a spellbinding final round. But first, an exercise!

Think — for just a second — how many non-winning moments do you remember from Augusta National’s 18th?

Surely, you’ve got nothing, and that’s okay. Because while the hole has produced everlasting moments of victory, it has rarely if ever produced something like what McIlroy produced Sunday.

McIlroy punched the air once, both arms uncontrollably extended, flipping his wedge into the sand like a home run hitter on a walk-off dinger. (It was a walk-off, after all!) Then he punched those arms out once again, completely overcome by the moment, the elation of a 3-year-old who’s made their first layup … or a 32-year-old who’s completed his best ever round at the Masters.

“Yeah, that’s as happy as I’ve ever been on a golf course right there,” McIlroy said shortly after. It would be appropriate to just leave it at that.

The hole out capped off a round he admitted would have made Seve Ballesteros proud. McIlroy sandwiched his birdie at the last with a birdie on the 1st, nary a bogey to be found in between. He had green jackets throwing their own hands to the sky in the clubhouse, patrons around the 18th chanting his name, and people all over the property thinking, Hey, maybe! (It was the least he could do, with Scheffler running away with it.) He even had himself thinking — for the first time in his life — that he could win a Masters tournament after 72 holes were done. As wild as it sounds, he’s never been in that position: a legitimate clubhouse leader.

“I don’t think I’ve ever walked away from this tournament as happy as I am today,” he said to the press later, exhausted and fully reconciled to the fact that Scheffler was taking the jacket this time. “I’ve played a really good round of golf, and it’s my best ever finish at Augusta. It’s not quite enough, but I’ll certainly look back on this day with very fond memories.”

Add it to the scrapbook, Rors!

The way McIlroy talks about Augusta National, you’d think he was a 4-time champion, who could play whenever he wants, and who doesn’t need invites. He makes special trips to Augusta National each year, seemingly just for the wine cellar. He’s built a rolodex of memories just from practice rounds with this father. On Tuesday, he even intimated that the passage of his time here has suddenly aligned with the passage of his life at-large. McIlroy and Augusta National are a true love affair, and one that finally has some bonafide positivity to it.

This was the inverse of his debacle in 2011 when he blew a four-shot lead. It was the opposite of his performance in 2018, when he started hot and faded to Patrick Reed. This felt like something new altogether, McIlroy making moves on the front nine and passing tests on the back. If anything, McIlroy and the Masters has started to feel like a video game, wherein the lead character respawns again and again and again, advancing a bit further along each time.

When players do what McIlroy did at the Masters, they first get interviewed in Butler Cabin, while the result of the event still hangs in the balance. They’re asked a couple quick questions and whisked off to watch the finish in the clubhouse, or hit practice on the range. Once the dust settles, the runner-up speaks with the press in the interview room, just as McIlroy did about an hour later. The high from his finish had worn off between these on-the-record moments but the last thing he said in Butler Cabin was one of the first things he said an hour later: “I’ll come back here next year and keep trying.”

He was grinning each time he said it.