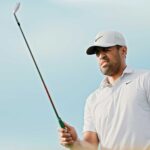 Finau's irons game begins away from the golf ball, locking in on a target.

Tony Finau has fought hard and risen through both the amateur and pro ranks to emerge as one of the most popular and powerful players in the game. His swing, once wild (“I had to play a big slice to make it work”), seemed destined for the long-drive circuit. Wanting more, he enlisted the expertise of GOLF Top 100 Teacher Boyd Summerhays, and together they drilled the needed parts to round out his game: consistency, accuracy, precision and finesse, especially with his irons.

The process took time — a slow but steady journey of incremental improvements. The result? Call Tony a legit five-tool player and a fair bet to don a green jacket — and maybe more — in 2022. The lessons learned are requisite reading for any player looking to reach their full potential and make playing the game, as Tony does, a heckuva lot more fun.

Tony’s take: You have to know where your irons are going. One drill I do — and I do it constantly, for as long as I can remember — is practicing with an alignment stick placed on my target line a few yards ahead of my setup. It’s something I learned from none other than Tiger Woods and Jack Nicklaus. What this drill does, as my coach Boyd Summerhays likes to say, is “bring the target to you.” I find it easier when my target — regardless of how far I carry the ball — is right in front of me. Sometimes I won’t even use the stick. I picture it in my mind. I do it during actual rounds. With the start line in my mind, I’ve done my thinking. Now it’s time to just hit the shot.

Boyd’s take: With this drill, Tony isn’t picking a specific spot on the ground. He’s placing the ball and the shaft in line with his start line. It creates a visual that simplifies his process, and he aims a little left or right of it when it’s time to shape a shot.

2. Think about your torso more than ball position

Tony’s take: The best ball position when hitting an iron is pretty much center. The funny thing, though, is that I don’t really think about the exact location of the ball so much as I do where my sternum is in relation to it. I focus more on where my center of gravity is located. If my sternum is way behind the ball, or too far in front, I’m probably going to shift around to compensate — not a good move when you’re looking for consistency. The feeling I’m after is my sternum on top of the ball, which helps you properly hit down on it. Everybody talks about ball position, but nobody knows where their weight is.

Boyd’s take: Tony actually plays the ball a little more up in his stance for his cut. Most golfers do ball position in relation to their feet; we do it in relation to Tony’s sternum. Wedges are almost under the sternum, and the ball gets slightly more forward as the club gets longer.

3. Match your wrist up with your swing

Tony’s take: I have long arms, so, at times, I feel like I struggle to “set” the club on my backswing. If I don’t set it early, I’ll need to do it later in my swing — another thing that robs me of  consistency. The feeling I strive for is in my right wrist. Use it as a trigger: Set the club early by hinging your right wrist, and then lay the club “down.” If you get your right wrist in the proper position, the face will follow suit.

Boyd’s take: Tony allows the clubface to open on his takeaway. It adds loft, which is necessary for him because he bows his left wrist as he starts down from the top, which closes and delofts the clubface. It’s a natural move that works for him.

FINAU ON THE COVER: Check out our April Cover Star

4. Reap the benefits of a short and quick backswing

Tony’s take: I have a short swing. If you do too,  I suggest you make it quicker, otherwise you won’t be able to generate enough speed to get the yards you’re looking for. Check out my backswing, or even Jon Rahm’s: They’re short but very quick. How else are you going to generate force, right? The difference between me and Jon is that he bows his wrist at the top of the backswing; I bow mine on the way down. I just need to make sure the left wrist and club is in the right spot: slightly flat and the face a little open. If it’s in that slot, the rest is easy.

Boyd’s take: Because Tony bows his wrist coming down, he can’t get the clubface too closed at the top, like Rahm does. If he does, he’ll close it even more and hit shots left. The key, regardless of your swing pattern, is to strive for a neutral clubface by the time you reach impact.

Tony’s take: One of my worst swing habits is “chicken-winging,” or keeping my lead elbow bent, through impact. I’ve battled it since I was a kid. It’s my way of avoiding a hook, but when I’m playing my best it disappears, and that’s what I try to focus on. During practice, I’ll place a glove under my left bicep. The goal: Swing without the glove dropping to the ground until well after impact. It’s all about moving through the shot and turning aggressively.

Boyd’s take: Tony tends to chicken-wing to avoid a closed clubface at impact. It’s especially important for amateurs to avoid because they often have an excessively open clubface at impact and need help closing it. The farther Tony hangs back, the more he needs to pull his left arm off his body. That’s really where his chicken wing comes from.

6. Finish on your left side

Tony’s take: As Boyd says, I want my sternum close to over the ball at setup and at impact. When I reach the finish, however, I want it over my front foot. That’s proof to me that I fully committed to the swing. When I hurt my ankle during the 2018 Masters, getting all the way over to my left side became much more difficult. I actually couldn’t put my entire weight on that foot until more than a year later. Now, when I’m hitting a good shot, I’m looking at the target and have close to 90 percent of my weight on my left side.

Boyd’s take: Tony was really good at getting to his left side until he hurt his ankle. It’s fully healed now, but a lot of people don’t realize he played in a good deal of pain for about a year, year and a half. It’s a testament to his resolve, toughness and competitiveness. Regardless, the lesson is simple: To strike your irons pure, end up with your weight on your front side.