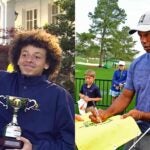 Hello friends and happy Masters Monday to you and yours! I have a few fun personal updates that I urge you all to pretend to care about before I get into the really good stuff. I had my first-ever clubfitting on Friday and it was amazing. I’m looking forward to getting some new clubs for the first time in over a decade and hopefully three-putting less this season. I also chatted with Jena Sims about her new Steve Madden golf shoe line, so keep an eye out for that video coming soon.

On to the Masters. I love this video of Tiger, so I wanted to share it with all of you.

My coworker Tim Reilly also saw something incredible in Augusta this morning that you all deserve to see. Rahm’s caddie was out and about!

And now for my official updates and thoughts.

Tiger once again arrives at Augusta

I discussed Tiger’s Tuesday trip to Augusta ad nauseam here, but plenty has happened since then. On Sunday, we (kind of) got an update on Tiger’s Masters plans.

A game-time decision! How about that? Going forward, I will RSVP to all of my commitments with the same level of vagueness. Am I going to meet my friends out at a bar? Game-time decision. Attend a family event? Game-time decision. My goal will be to stir up 1% of the commotion that Tiger’s above Tweet did. In all seriousness, though, it’s crazy to think about how far Tiger has come in the last year.

Tiger teed it up at Augusta on Sunday and surprise, surprise, the golf world once again went nuts. He wasn’t wearing his typical Sunday red, but I’m willing to overlook that because of how cool he looked anyway. Also, the internet freaked out because of the shoes Tiger was wearing. He’s gotta be the only 46-year-old on the planet whose footwear we care about.

Also, a huge shoutout to the Masters’ social team for putting together the best content of the year. If you do one thing after reading this, check out just how good its Instagram and Twitter pages are.

Tiger asks for an autograph

Tiger has signed over six million autographs in his lifetime. That’s a number I just made up for emphasis, but the tables turned for Tiger this week when he asked David Lynn for his autographic.

I did unfortunately have to google “Who is David Lynn?” before this write-up, but the note from Tiger is awesome.

Please would you be kind enough to sign the photograph and send back to me at Jupiter Island please, it is for my personal collection and not resale.

A few things to note here. I think this is the first time I’ve seen Tiger’s penmanship. Decent handwriting! Also, I love that he clarified that the autograph isn’t for resale. If Tiger asked me to sign something, he could do whatever he wanted with it (although I don’t think it would go for much on eBay). And finally, this is a particularly niche image which makes me wonder what Tiger’s entire “personal collection” looks like.

Congratulations to 16-year-old (!) Anna Davis, who won the Augusta National Women’s Amateur on Saturday. Not only did she play incredible golf, but she ignited a pro-bucket hat discussion on the interweb.

Even Joel Dahmen, a fellow member of the bucket-hat wearing community, took note.

Imagine not only winning on a national stage, but your style influencing the golf world at age 16? I wore boat shoes and struggled to crack the starting lineup on my high school golf team at that age, so I personally cannot relate to Davis. But I’m really excited to see where her career goes from here.

If you weren’t feeling bad about your own game after watching Anna Davis make history at Augusta National on Saturday, the talent at the Drive, Chip and Putt surely did the trick.

We all know these kids can play golf. That’s why they’re there. What really makes the event, in my opinion, are the interviews and behind-the-scenes stuff from the day because let’s face it — kids are really funny.

First up we have Kylie Chung, who won the girls’ ages 10-11 division and gave an amazing interview after.

Her poise! Her level of confidence. I look forward to watching Chung tee it up in the Augusta National Women’s Amateur one day.

Next up we have Lucky Cruz (incredible name, by the way).

Cruz fears nothing. Imagine getting a picture with a two-time major champion and giving him bunny ears? The whole video is hilarious and with that sense of humor, I can’t help but wonder if Cruz is the next Max Homa.

And finally, my absolute favorite part of the day was everything Autumn Solesbee-related.

You can read all about Autumn’s incredible story here, but she was in foster care at age seven and adopted just two years ago. On Sunday, she won at Augusta National. Today, she’s probably back in her third grade classroom, but in her post-win interview, Autumn mentioned that she’s going to throw a big party to celebrate her Drive, Chip and Putt victory. As she should.

Richard Bland may not have met the criteria to earn a Masters invitation on Sunday, but Ian Poulter made sure to make him feel better about it.

And lucky for us, that came in the form of sharing an incredible Darren Clarke story.

Sending a note from the Masters to a guy who didn’t get invited is such a hilarious power move. And having players, including Tiger, sign it just brings it all to the next level. This further confirms my theory that (aside from Max Homa) the Euros are the funniest guys on Tour.

A friendship I’m excited about

There are a handful of bromances on the PGA Tour, and I’m all-in on this potential new one: Dustin Johnson and Harry Higgs.

Claude Harmon shared a photo of Austin Johnson, Garrick Higgo, Harry Higgs and DJ at Augusta on Sunday and it got me thinking. Could this be the friendship the PGA Tour needs? An unintentionally hilarious major champ and The People’s golfer? Both make us laugh, but for completely different reasons. For instance, Higgs took his shirt off at the Waste Management. And DJ gives us great interviews like this.

Here’s to more great content from the two of them. Hopefully together.

What I’m most excited for this week

It’s the Masters! There’s SO much to look foward to. But I’m most excited for the honorary starters (I always tear up watching them tee off. Is that embarrassing to admit? Maybe), seeing what Tiger does and enjoying the best Trader Joe’s snacks money can buy while watching the golf. I want to see legendary Masters marker Jeff Knox tee it up this weekend, and I want some amateurs to make the cut.

Here’s to a great week, folks.