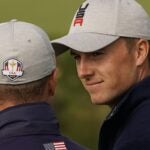 Check in every week for the unfiltered opinions of our writers and editors as they break down the hottest topics in the sport, and join the conversation by tweeting us @golf_com. This week, we discuss the Ryder Cup captains’ picks, PGA Tour Player of the Year and more.

1. On Wednesday, Steve Stricker named his six captain’s picks for the U.S. team that will play in next week’s Ryder Cup at Whistling Straits, choosing Tony Finau, Xander Schauffele, Jordan Spieth, Harris English, Daniel Berger and Scottie Scheffler. Which pick do you think will have the most impact on the U.S. side?

Sean Zak, senior editor (@Sean_Zak): Spieth. He’s (surely) going to be paired up with Justin Thomas and his wobbly putter. The Spieth magic on the greens coupled with elite ballstriking from JT should be as formidable as any duo at Whistling Straits. Could easily see them playing together four times. Just need to figure out what to name them … The J&J?

Zephyr Melton, assistant editor (@zephyrmelton): Scottie Scheffler. The kid is not afraid of the big stage — as evidenced by his play in majors — and he’s long enough off the tee to really take advantage of Whistling Straits. Call me a Texas homer, but in the words of another Longhorn great, “I have a good feeling about this.”

Josh Sens, senior writer (@joshsens): Spieth is a good call. Next up, my gut goes with the gutty Daniel Berger. I’ll borrow from Zephyr, who’s borrowing from Ben Crenshaw, when I say I’ve got a feeling about him. One of those bulldogs who is going to be really hard to shake.

Michael Bamberger, senior writer: I only consider Harris English, Daniel Berger and Scottie Scheffler as true captain’s picks. Of that group, Scheffler. He seems the most big-time to me, or big-time in the making.

Dylan Dethier, senior writer (@dylan_dethier): Schauffele. He and Cantlay, alongside JT and Spieth, feel like the American tandems that will play the most matches and ultimately determine the result of this one.

2. Among the players Stricker did not pick for the team were Patrick Reed, Kevin Na, Will Zalatoris, Webb Simpson, Sam Burns, Jason Kokrak, Billy Horschel and Kevin Kisner. Stricker admitted to losing sleep over the Reed selection. If he had an alternate 13th pick, whom would you advise him to take, and why?

Zak: If he was being honest about losing sleep over Reed, then he should probably go with Reed in that hypothetical. I understand the easy argument against Reed, but if he was considered so thoroughly, I’m not sure why anyone else would merit it more in Stricker’s eyes.

Melton: Kevin Na was in superb form coming down the stretch, so if you want to add a hot player, he’s your guy. However, we know Patrick Reed performs his best with a chip on his shoulder. What better motivator than getting passed over the first time around?

Sens: Most of us lose sleep over irrational things. In the plain light of day, not picking Reed, given his recent health issues, to say nothing of the chemistry problems that arose last time around, makes perfect sense. I have no beef with Stricker’s picks, but Na would be my next call if I had to make one — such a gritty player who has been in such great form.

Bamberger: Perfectly said, Josh. I’d take Na in a minute, because he’s a superb putter under pressure, he’s annoying, he wants it, and it’s his last best chance, in all likelihood.

Dethier: My instinct is Burns, but the more I go ’round and ’round on this I keep coming back to Reed as the proper fill-in. If you and a bunch of buddies were going in on a beach house together for the summer, you’d really want to focus on group chemistry. But the point of this team is to win one weekend. Gimme the wild card who irrationally wants this — maybe he’ll light a fire under more docile teammates.

3. On the other side of the pond, Sunday’s final round of the BMW PGA Championship finalized the nine automatic picks for the European Ryder Cup team, with Paul Casey, Matt Fitzpatrick, Tommy Fleetwood, Tyrrell Hatton, Viktor Hovland, Rory McIlroy, Jon Rahm, Lee Westwood and Bernd Wiesberger making the team. Afterward, captain Padraig Harrington went with Sergio Garcia, Shane Lowry and Ian Poulter as his three captain’s picks. What’s your takeaway from the team? Did Harrington make the right picks?

Zak: Yes! Correct captain’s picks on both sides of the pond. My takeaway from that team is they are going to be very good. Probably the deepest Euro squad since 2012. This thing is setting up to be really, really good.

Melton: The Euros have a solid team that is laden with experience. Although the Cup will be contested in hostile territory, don’t expect the blue and yellow to be rattled easily. Harrington should feel extremely confident with the team he’s taking to Wisconsin.

Sens: Agreed. Like the US team, a great mix of youth and seasoning. Who were Harrington’s other options? Maybe you could make an outside argument for Justin Rose, based on past accomplishments, but not on recent form. Alex Noren? Nah. No second guessing of Harrington here.

Bamberger: My takeaway is that Harrington has an outstanding team, with outstanding picks, and an outstanding captain. The Europeans are the favorites, in my book. If they don’t win it’s a surprise.

Dethier: As much as I yearned for the 20-year-old Hojgaard twins to team up, there’s plenty of time for that in the future. Harrington essentially had no choice but to go back to the same formula that keeps working for Team Europe. At some point, this group of golfers won’t be the best available. But it doesn’t feel like we’re at that point yet.

4. The European selection process came under some fire from Lee Westwood, a longtime Ryder Cupper. His ire came from the fact that the team wasn’t decided until this week’s BMW, one of the biggest events on the European Tour and just 12 days before the start of the event. “It is going to be draining for a few, and you want to be going into the Ryder Cup fresh,” Westwood said. “I think some of the guys turning up here don’t need this week right now, knowing what the Ryder Cup is like, they don’t need this week, two weeks before The Ryder Cup. This tournament is heavily loaded compared to everything else we’ve done, and I think it’s something to maybe look at in the future.”

Harrington defended the process, saying he liked that his players were under pressure. “It’s not just they are going out to trying to win a golf tournament, but they are also trying to win a golf tournament knowing what it means in the bigger picture,” he said. “It’s the kind of drama that I was hoping because that’s what you need when it comes to the Ryder Cup. You have to be able to handle the stress and pressure of what’s going on.” Do you like Harrington’s strategy?

Zak: I dig it. The team has plenty of time to travel over to the States and get their bodies ready for the competition. This isn’t Paris in 2018 when Tiger technically won as Monday morning of Cup week was beginning in France. Westy probably overthinking it, though I’m glad he’s thinking about it.

Melton: Count me on Team Harrington on this issue. Manufacturing some pressure a couple weeks before the Cup will pay dividends when the spotlight is on.

Sens: I don’t know why anyone wouldn’t be a huge Lee Westwood fan. But Harrington’s thinking makes much more sense here. These guys have devoted their entire lives to being ready for precisely these moments. The more experience in the cauldron, the better. They can take some long naps in October if they really need the rest.

Bamberger: This is not really worthy of debate. All they’re trying to do is make a Ryder Cup team. I’m totally with Harrington. Let’s not parse this thing to death. It’s an international golfing get-together for bragging rights.

Dethier: The flip side of this question: Will Team USA be rusty after two full weeks away?

5. Patrick Cantlay, Bryson DeChambeau, Harris English, Collin Morikawa and Jon Rahm were named finalists for the PGA Tour Player of the Year award, which is decided by the players themselves. If you had a vote, who gets it, and why?

Zak: The answer is Rahm, and I think Tour players will recognize it. Are they shrewd voters? Eh, maybe not. But Rahm dominated this year. And he bagged a major. Players realize that Cantlay’s FedEx Cup and Memorial wins come with a bit of an asterisk, even if the Tour record books will never reflect it.

Bamberger: Rahm. I believe that award goes to the player whose season you would most wish to have had. Just the golf, not the Covid-19 part of things. I’d want Rahm’s PGA Tour year. Rahm won at East Lake, in my book.

Sens: Rahm, for all the reasons Sean lays out above.

Dethier: Count me in to make it unanimous for Rahm. He was the season’s best golfer.

6. The PGA Tour, after a one-week break, begins its 2021-22 season this week at the Fortinet Championship. Kindly give us your boldest prediction for the upcoming season.

Zak: Louis Oosthuizen finally gets it done. He wins the U.S. Open at The Country Club. A classy win by a classy player at a classy place. And then he flirts with doing it again at the Old Course.

Melton: We get Golf Boys Part 3.

Sens: Rory McIlroy and Jordan Spieth each complete the career Grand Slam, with wins at the Masters and the PGA Championship (at Southern Hills), respectively.

Bamberger: A teenager, amateur or not, and a 50-something both win PGA Tour events this year.

Dethier: Tiger Woods will play in a PGA Tour event.