‘They don’t need this week’: Europeans call out flaw in Ryder Cup qualifying 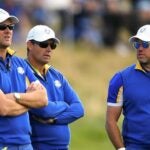 Is the European Ryder Cup team entering Whistling Straits at a disadvantage?

Not all Ryder Cup teams are created equal, just ask the Europeans. Team Europe does things differently than the U.S. side — team selection, final rosters, even uniforms — and it’s worked to great success over the last two centuries. In fact, Team Europe’s biggest strategic blessing is that things are a little uneven. With wins in seven of the last nine outings, the Europeans have proved that even underdogs can (and frequently do) find ways to succeed at the Ryder Cup by focusing on competency rather than ability.

But now, some prospective members of Team Europe are sounding the alarm over what they see as inequity in the Ryder Cup — an issue they say might actually be costing them in the long run. The problem surrounds the qualifying process, and in particular, the European side’s current lack of roster clarity. While the U.S. roster was finalized shortly after the completion of the Tour Championship last weekend, the Europeans have until the completion of this week’s BMW PGA Championship to confirm the majority of their selections, giving those in the field an extra week to push for a spot on the team.

“You can see how players are reacting to it out on the golf course,” Lee Westwood said. “You know there’s people right in there, and they are shooting scores where clearly they have got other things on their mind. Yeah, there’s so many variables, as well, with the way we’ve set up the qualification this time around.”

Unlike the U.S. side, which matched six auto-qualifiers with six captain’s picks, the European team has nine auto-qualifiers and three captain’s choices. Qualifiers are determined by their overall number of Ryder Cup points, which are based largely on player performance. Five members of the European side have already punched their tickets through the Ryder Cup formula — Jon Rahm, Paul Casey, Rory McIlroy, Viktor Hovland and Tommy Fleetwood — while this week’s tournament could play a significant role in shaping the remaining four spots.

With that in mind, Westwood says burnout should be of particular concern to European captain Padraig Harrington, particularly for players who are not only pressing hard this weekend, but also will only have one full week of rest between the BMW PGA and the start of the tournament.

“It is going to be draining for a few, and you want to be going into the Ryder Cup fresh,” Westwood said. “I think some of the guys turning up here don’t need this week right now, knowing what the Ryder Cup is like, they don’t need this week, two weeks before The Ryder Cup. This tournament is heavily loaded compared to everything else we’ve done, and I think it’s something to maybe look at in the future.”

Westwood is currently locked in a battle with 2019 Open Championship winner Shane Lowry for one of the final auto-bids on the European team, and while it seems likely both players will wind up on the final roster through one method or the other, Lowry is still surprised by the significance this weekend’s tournament holds.

For Lowry (and the remainder of the European Ryder Cup hopefuls), if there’s some peace of mind, it’s knowing that Harrington and the rest of the Ryder Cup leadership have seen plenty more than the last few days. Whether it’s fair it all comes down to this week? Well, that’s a different story.

“I feel quite good about it. I feel pretty laid back about it. I’m not anxious about the whole thing,” Lowry insisted. “I feel like I’ve played really well over the last while and consistently well, and I feel like I’ve put my hand up. It’s up to Paddy what he wants to do Sunday evening.”