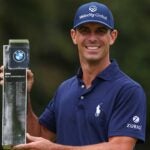 Billy Horschel is just the second American to win the BMW PGA Championship.

The week started in disappointment for Billy Horschel as he missed out on qualifying for his first Ryder Cup team when teams were announced on Wednesday. However, just four days later, the week ended in jubilation.

Horschel won the BMW PGA Championship in Surrey, England, on Sunday morning, holding off Kiradech Aphibarnrat, Jamie Donaldson and Laurie Canter to secure the one-shot victory. The win is Horschel’s first on European soil and his second victory of 2021.

“I’m speechless …  To win this event means a lot,” Horschel said. “In my mind, it’s equivalent to The Players Championship. We have a great event on the PGA Tour, and I live there and would love to live that one, but I have this one under my belt, and I’m very happy.”

Horschel’s final-round 65 was bogey-free as he carded seven birdies, including the decisive blow at the par-5 18th. He played his final 29 holes of the tournament without a blemish on the card as he crept up the leaderboard, eventually taking hold of the top spot for good late in the final round.

“I think tied for the lead at the moment at 18-under with three holes to play, three birdie holes, and I knew if I could birdie two of the three, I probably would win the event,” he said. “But one birdie was good enough.”

With the win, Horschel joins Arnold Palmer as the only other American to win the BMW PGA Championship.

After winning the WGC-Dell Match Play earlier this year, Horschel was in a strong position to make a run at making his first Ryder Cup team, but after a summer of lackluster play, the 34-year-old finished a distant 17th in the final standings and did not receive one of Steve Stricker’s captain’s picks.

And while Horschel acknowledged that he did not expect to make this year’s team, he was surprised when captain Stricker did not call him to let him know he was left off.

That added motivation proved to be the difference.