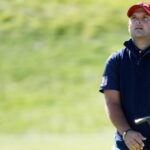 Patrick Reed has been a Team USA staple in recent Ryder Cups, but he will watch from home this year.

After much deliberation over the past several months, Steve Stricker released his captain’s picks for the Ryder Cup during a press conference on Wednesday at Whistling Straits. His six picks of Daniel Berger, Harris English, Jordan Spieth, Tony Finau, Scottie Scheffler and Xander Schauffele round out the team that will represent the U.S. in Wisconsin later this month.

Those six will join Dustin Johnson, Bryson DeChambeau, Collin Morikawa, Patrick Cantlay, Justin Thomas and Brooks Koepka on Team USA, as the Americans look to win back the Ryder Cup after a 17.5-10.5 beatdown at the hands of the Europeans three years ago.

Stricker said he feels confident in his picks and believes he has a strong team heading to Whistling Straits, but there were several strong players left off the team with legit cases for being selected. Here are eight hopefuls who were left off the 2021 Ryder Cup team.

Patrick Reed has been a staple of Team USA since making his first appearance in 2014, but that experience was not enough to get a nod from Stricker. While Captain America brings plenty of spark in team events, he also brings plenty of controversy. His criticism of Jim Furyk after the 2018 Ryder Cup likely didn’t help his chances, and his recent form has not been the best either. Reed has not registered a top-10 finish since early June, and he had a scary bout with double pneumonia just two weeks ago. “It wasn’t an easy one,” Stricker said, “but I think it was just the uncertainty of his health, and really the lack of play that led to our decision down the stretch.”

Kevin Na wasn’t on anyone’s Ryder Cup radar for most of the summer, but a recent hot streak thrust him into the conversation. Starting in early July, Na registered four top-eight finishes in six starts, and he carded the low 72-hole score at the Tour Championship, which gave his Ryder Cup candidacy a late lift. However, ranking 170th in driving distance likely didn’t help his cause. It was a case of too little, too late for the veteran.

Stricker didn’t hesitate to fill out his team with rookies, but he didn’t go so far as to go with a trendy pick of Will Zalatoris. While the 25-year-old ball-striking machine was a consistent force on Tour this season — including a runner-up finish at Augusta — his woes on the greens likely doomed his chances. He ranked 122nd on Tour in SG: Putting last season, and in an event that is won and lost on the putting surface, that deficiency was just too much to overcome.

Webb Simpson, 13th in the Ryder Cup standings, didn’t make it to the Tour Championship but had six top 10s and 13 top 25s in 21 starts last season. With just three missed cuts on the season, few players are more consistent than the three-time Ryder Cupper. But in a year when Team USA went young, there just wasn’t a spot for Simpson on this team.

Sam Burns had a breakout season in 2021, earning his first Tour victory and notching eight top 10s in 26 starts, but his Ryder Cup candidacy never got as much buzz as some of his fellow countrymen. Stroke-gained analytics favor Burns — eight in SG: Putting, 14th in SG: Total — but he also struggled in big-time events. He made just one cut in majors in 2021 (T76 at The Open), and he racked up many of his high finishes, including his win at the Valspar, in events with weaker fields. If he wants to represent Team USA, he’ll have to perform a bit better on the biggest stages.

Jason Kokrak had one of the strongest seasons of his career in 2021 as he earned two wins and 12 top 25s in 27 starts, but recency bias did him no favors. According to Data Golf’s Ryder Cup rankings, he was 24th over the last three months prior to selections, and his lack of any team-golf experience was also a ding on his resume. His game is a perfect fit for Whistling Straits, but there were too many better options on the table for Stricker this year.

Billy Horschel boosted his Ryder Cup resume in the spring with a win at the WGC Match Play in Texas, but after the victory he didn’t quite do enough to merit a selection. His lack of prior Ryder Cup experience was also a glaring hole in the resume for the 34-year-old.

Kevin Kisner has proven himself to be a tough out in match play competitions during his career, but his form in 2021 never gave him much of a chance at making this team. Outside of ranking 32nd in SG: Putting, Kisner did not have another strokes-gained category where he ranked inside the top 80. He did earn a win just a few weeks ago at the Wyndham Championship, but his ball-striking deficiencies over the last 18 months sunk his chances.