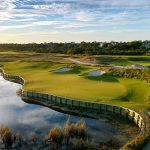 The par-3 17th hole on the Ocean Course at Kiawah Island.

Check in every week for the unfiltered opinions of our writers and editors as they break down the hottest topics in the sport, and join the conversation by tweeting us @golf_com. This week, we discuss this week’s PGA Championship at Kiawah Island, the NCAA’s decision to cancel a women’s golf regional, Richard Bland’s victory and more.

1. Welcome to PGA Championship week. We’re not without several juicy storylines. Rory McIlroy, fresh off a victory at the Wells Fargo Championship, returns to the site of one of his four major championship wins. Jordan Spieth, a winner this year for the first time since 2017, seeks the one major that has escaped him. Bryson DeChambeau, the longest hitter on Tour, tackles what is expected to be the longest course in major championship history. There are dozens of other stories that we’ll no doubt track on the mighty Ocean Course on Kiawah Island. Which one most intrigues you this week?

Michael Bamberger, senior writer: Of the stories that are waving their hands and screaming, it’s got to be Jordan Spieth. Career grand slam is some statement. On the less obvious stories, the fellas will play a course moving toward 8,000 yards, and it still will play short (or shortish) in the early-morning calm: What can golf do to make 7,200 yards meaningful again?

Sean Zak, senior editor (@sean_zak): Spieth is the right answer, so kudos to Bamberger for logging on first. Excuse me for beating a dead horse, but Bryson will still be fascinating to watch. We thought his golf might work only at certain places, but then he went and contended at TPC Sawgrass. We didn’t really expect him to play well at Harding Park, but then he grinded and grinded and finished T4. I think he’s more fascinating to watch this week than at Augusta National. The toughest courses seem to bring something out in him.

Josh Sens, senior writer (@JoshSens): Which Dustin Johnson will we see? The dominant DJ of 2020, or the enigmatic DJ who has been mostly a non-factor this season. Something tells me he’s going to shake off his recent slumber.

Nick Piastowski, senior editor (@nickpia): I’m genuinely fascinated by the Rory arc over, really, just the past month. At the Masters, he, in order, hit his dad (!) with an approach, shot 76-74, missed his second straight cut and was surrounded by rumblings of how his game looked lost. And then he won his next time out, and he’s now one of the favorites. What a spike! He won at Kiawah in 2012, but which version of McIlroy will show up this week?

2. When the wind blows on the exposed Ocean Course, there are few tougher tests in golf — as evidenced in the second round of the 2012 PGA when the wind blew 20-30 mph and the scoring average ballooned north of 78. What course across all the majors do you think gives the players the most anxiety?

Bamberger: Carnoustie. You know it’s Carnoustie because all the really good golfers like it.

Zak: If they visited Kiawah more frequently, I think that might rank highest. Oakmont comes to mind mainly because it feels straightforward. Few hazards to be found. Just play good golf and hit straight shots, right? Wrong. Something at Oakmont will always trip you up.

Sens: Winged Foot. Sure, Bryson cut through the rough like it was butter at last year’s U.S. Open. But he was the only guy under par for the week.

Piastowski: Shinnecock, in 2004 conditions. If you want to have some fun, just Google Shinnecock 2004 and read the headlines. And I’m gonna go with a close second to Augusta National. It’s the one constant course — meaning it’s on players’ minds all year round. And the Masters is maybe the tournament players want to win the most — meaning it’s on their mind since the second they picked up a club.

3. Range finders will make their major debut at the Ocean Course, and more than a few players, including Justin Thomas, Webb Simpson and Bryson DeChambeau, said they believe they will actually slow down play. Agree?

Bamberger: Can Thursday-Friday golf on a long course with wind be slower? No, I don’t think slower. But it’s another kick in the shins to ye olde game. Let us use ’em; let the fellas figure it out on the ground. It’s worked well for a long time. The introduction of technology into golf, broadly speaking, has not served the game well. As Exhibit A, I offer you the electric cart.

Zak: Yeah, we debated this exact topic in this exact fashion months ago. It won’t slow them down much, but it won’t really improve the pace much either. Figuring out the carry distance over a bunker can actually be easier with the sprinkler heads than with the range finder. Don’t know how? Ask a caddie.

Sens: In theory, it should make things faster, and I suspect it will for the pros this week. But at the risk of sounding like the grumpy luddite that I am, technology also has a way of delivering the opposite of what it promises. That’s been my experience in recreational golf, anyway. For the most part, the gadget-happy golfers I’ve encountered have been snails. Maybe it’s the type of personalities who are attracted to data-tracking — they get obsessed with information-gathering when they’d probably be better off just eyeballing the distance and swinging. OK, boomer rant over. Now, you other kids, get off of my yard!

Piastowski: Yes. With a major championship on the line, I would totally get my number from my caddie, double-check it with my range finder, double-check a potential new number with my caddie — and then maybe swing. Of course, there is a shot clock, but we’ve seen how that’s been enforced.

4. In a controversial decision, a rain-plagued NCAA Division I Women’s Golf Championships regional event in Baton Rouge, La., was canceled Wednesday without a single shot being played. After taking on 7 inches of rain, the course was deemed to be “playable but not championship level.” To say the least, the decision was met with a good deal of frustration. “Thank you for ending our careers!” one player shouted as it was announced. The NCAA was hammered on social media for nixing the event. Any way to justify the decision?

Bamberger: If there’s a will, there’s a way. The players and their coaches surely had the will. The NCAA bureau chiefs clearly did not. So, without knowing much, no.

Zak: The rule book is the only way, as in the NCAA bylaws rule book and the specific number of days the regional was allotted to finish the event. It’s a ridiculous hill to die on, but the committee was clearly ready to do so. It’ll follow them for a while, I’d think.

Sens: What’s that old rule of thumb? Oh yeah. Everyone would have been playing the same course. That’s the rule they should have followed.

Piastowski: I just don’t think that there is. I can appreciate the fact that the officials wanted only the best for the players in terms of a course — but what then got lost is the actual best thing for the players, which was an opportunity to play for a championship. Following up on what Sens said, it’s not like one group of players would play the course differently than the others. Adjust the course as need be and play on.

5. Jason Day, who has not yet qualified for the 2021 U.S. Open, said this week that he would not enter qualifying to do so. “If I don’t get in, I’m not qualifying,” he said, adding that he will attend a corporate outing on the Monday after the Memorial instead of the sectional qualifier in Ohio. “I got to do it the other way round, which I got to play well or win a tournament in the next two weeks.” Any issue with Day ducking qualifying?

Bamberger: No. It’s his career. I can’t imagine Hogan, Nelson, Snead, Palmer, Player, Jack, Tiger, Faldo or Watson (any Watson) saying what Day said here, but that’s golf and that’s human nature. No issue at all.

Zak: Life your life, man. Jason Day is just showing what he values most, which he’s entitled to do. We, the Honourable Company of Tour Confidential, are entitled to think it’s a goofy decision, and that’s where I stand.

Sens: Combine the answers above, and you have mine.

Piastowski: Agree with all of the above. I’d do anything I could to try to make it, especially if I had some success on the eventual U.S. Open course. He’d rather not. In this case, to each his own.

6. The year of the long-awaited victory (Spieth, Hideki Matuyama, Lydia Ko) may have seen its biggest one yet this week. Richard Bland, at the Betfred British Masters, won for the first time — at the age of 48 and in his 478th start, making him the oldest first-time winner in European Tour history. Where does Bland’s victory rank on pro golf’s persistence scale? Anyone rival him?

Bamberger: Well, for persistence there’s Mac O’Grady’s path to a Tour card. (Believe he went to Tour school 17 times.) There’s Tom Lehman grinding it out in AAA for a decade. There’s Hogan after the bus crashed into his Cadillac. But it’s spectacular. It will motivate many.

Zak: Bland’s win has to be on the Mount Rushmore of persistence! What I love is that there are many, many derivatives of Bland’s win that play out all the time in pro golf. Joel Dahmen winning in the Dominican Republic. Jordan Spieth winning for the first time in four years. Adam Scott’s persistence with the putter. This game asks you to quit constantly. Constantly!

Sens: Maybe we could get our stat-guru, Mark Broadie, to come up with a metric so we can rank persistence. Bland’s certainly seems right up there. I’d say that Brendon Todd showed an epic degree of determination while fighting through the full-swing yips for years. Those are the kind of woes that would have had a lot of guys curled up in the shower in a fetal position. And who says persistence has to be the hallmark of an unsung player? Tiger Woods’ comeback surely belongs on the Rushmore of Persistence, too.

Piastowski: It’s very up there. The Hogan and Todd answers are good ones. It’s pretty incredible how Bland kept going to the well, kept thinking — for 20-plus years — that maybe that next tournament would finally be the one. It’s pretty incredible, too, how his family never gave up on him, either. Those are the best sports stories.