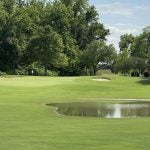 According to the NCAA, the University Club at LSU received over 7 inches of rain this week.

In a controversial decision, a rain-plagued NCAA Division I Women’s Golf Championships regional event in Baton Rouge, La., was canceled Wednesday without a single shot being played. After taking on 7 inches of rain, the course was deemed to be “playable but not championship level.”

Brad Hurlbut, an NCAA Committee representative on site, issued the announcement to a crowd of stunned competitors and coaches at University Club on the Louisiana State University campus.

“This is one of the most gut-wrenching decisions and announcements that I’ve ever been a part of,” said Hurlbut, who is the athletic director at Fairleigh Dickinson University. “The course is playable, but it is not playable at a championship level.”

The 54-hole tournament was originally scheduled to begin on Monday but after heavy rain was postponed to Tuesday. Ditto on Wednesday before the event was canceled altogether. According to Golfweek, the possibility of nixing the event was made clear to coaches as early as Sunday when the forecast began to look grim. Pushing the event back another day, they were told, was not an option.

Hurlbut spoke from stairs in front of the clubhouse and could barely finish his first sentence before he was met with scorn and gasps from the players gathered before him. He said that the top six seeds in the event (out of 18 teams) would advance, as would the top three individual players (out of six).

The group of competitors immediately shouted in some form of jumbled unison: “It’s playable!”

Without further explanation or taking any questions, Hurlbut and the group on the stairs turned and made their way back to the clubhouse. Several observers in the crowd captured the sequence on camera and shared it to social media.

“This is a joke,” another person shouted. “You should be ashamed of yourselves.”

Added another, “Thank you for ending our careers!”

As is clear on the video, the weight of the decision began to hit home for many of the competitors. Some broke into tears and were consoled by teammates. The advancing teams were LSU, Ole Miss, Baylor, Oregon, Maryland and Alabama. Seventh-seeded Oregon State and 8th-seeded Houston were left on the outside looking in.

Just how bad were the conditions?

According to Golfweek, multiple coaches sounded off about the host site’s ability to adjust on the fly to the rainfall; some felt the event could have been played in spurts over multiple days. Mikayla Tatman, an assistant coach at Tulsa, tweeted multiple videos of wet, but, according to her, playable fairways for a competitive round.

Below is a thread of photos from one player on the University of Miami roster, Sara Byrne, who shared plenty of thoughts about the conditions at LSU.

Hours after the announcement was made on site, the NCAA released a statement:

Committee policy states that since play could not take place Wednesday, advancement will be determined by the original seeding of teams used for selection to the 2021 championship, with the top six teams and top three individuals, not on an advancing team, going to the national championships.