Can you quantify suspense? Our stats guru crunched the numbers to identify the best PGA Championships 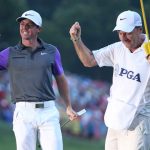 Rory McIlroy parred his final hole in the dark to claim the 2014 PGA Championship at Valhalla. But where does his win rank in terms of suspense?

Every major championship comes with buzz and buildup. But in the fall of 1927, as the PGA Championship approached, the air of suspense was especially thick. Walter Hagen, the 1921 PGA winner, had also claimed the crown in ’24, ’25 and ’26. Now, he had a chance at something historic: an unprecedented four straight victories in a major. No wonder the atmosphere was electric.

Suspense, the time when the outcome of a contest is in doubt, is a squishy concept, tough to measure. But we’re all familiar with its effects. When a basketball team is up 30 points at the half, I usually won’t bother watching through the final buzzer. On the other hand, if the game is tight, I’m glued to my seat.

The same applies to golf tournaments, which made me wonder: Is there a way to quantify suspense? And, if so, which PGA Championship in the era of Tour stats — starting in 1983 — offered the most sustained fourth-round suspense?

To quantify “sustained suspense,” I turned to win probability, which was useful in identifying the best major-less player and in measuring high-leverage, or “clutch,” performance earlier this year. Win probability is a helpful metric because suspense is a function of uncertainty, and uncertainty increases with the number of players who have a realistic chance of winning.

With that understanding, I started crunching numbers. To measure sustained suspense, I looked at maximum win probability at the beginning of the fourth round and then at six other times during the last two and a half hours of regulation play. For each event, I combined those seven numbers and put them on a scale from zero to 100, where 100 is the highest possible suspense score.

To validate this method, I first searched for the least suspenseful PGA Championship fourth round since 1983.

That honor goes to the 2019 PGA, won by Brooks Koepka, with a suspense score of 6.2 on the 100-point scale. No shock, really, given that Koepka started the fourth round with a seven-stroke advantage and never relinquished his lead, despite a charge by Dustin Johnson.

The 6.2 suspense ranking squares with my own experience of watching that Sunday: Though DJ briefly made it close, the final outcome never really felt in doubt.

On the flip side, the 1987 PGA was a nail-biter, and the numbers bear that out: The tournament, which was won by future Hall of Famer Larry Nelson, had a suspense score of 97.0, the highest of any PGA I measured. The final round began with a clustered leaderboard, with Nelson, Ray Floyd, Seve Ballesteros and Lanny Wadkins within three shots of the co-leaders, Mark McCumber and D.A. Weibring. And it remained a crowded horse race throughout the day. With four holes to play, Nelson and Scott Hoch were tied for the lead, and three others were within two strokes. Nelson and Wadkins wound up in a playoff, which Nelson won for this third major title.

As for the 1927 PGA, it lived up to the hype. Hagen wound up winning, 1 up, over Joe Turnesa (the PGA used a matchplay format in those days) for his fourth victory in a row. Exciting. But not quite as riveting as what transpired at the PGA in ’23, the year before Hagen kicked off his historic streak. In that event, held at Pelham Country Club in New York, where I happen to be a member, Hagen made it to the 36-hole final against defending champ Gene Sarazen. Their match was even after 18 holes, and even again after 36. The outcome was decided when Sarazen prevailed on the second playoff hole. Talk about suspense!

Check out our selection of range finders at every price point