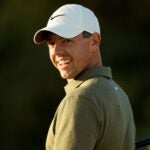 If Rory McIlroy were to retire today, he’d be considered one of the greatest players of his generation. With four major championships, 28 wins worldwide and more than $50 million in career earnings, there are few golfers in history whose body of work surpasses McIlroy’s.

But even with this world-class resume, questions linger about unfulfilled potential, especially in the majors. McIlroy’s 22 top 10s in golf’s four biggest events is a huge achievement, but when coupled with context, that number loses some luster. The Masters might be the best example of McIlroy’s top-10 Houdini act, as he’s finished worse than 10th only once in the last seven years in pursuit of the career Grand Slam — while never being in serious Sunday-afternoon contention in any of them.

There’s probably no easy answer as to why McIlroy has been struggling in recent years to drop the hammer on his competition when it matters most, but that won’t stop pundits from speculating. Count 16-time PGA Tour winner Tom Weiskopf among those trying to unriddle the McIlroy conundrum. In an interview with Golfweek‘s Adam Schupak, the always-candid Weiskopf reflected on McIlroy’s career.

“I look at Rory McIlroy and I think golf is something just for (him) to do,” Weiskopf told Schupak. “I’ve said it for a while now that I don’t think he’ll win much more than the four (majors) he’s got or maybe five because I don’t see that determination and will to be the best.”

Weiskopf, who won the 1973 Open Championship, went on to speculate that World No. 1 Dustin Johnson has exhibited more determination on the course than has McIlroy. With two majors to his name and 27 wins worldwide, Johnson is in the same echelon of talent as McIlroy, but in Weiskopf’s mind Johnson has confidence and drive that McIlroy lacks.

“I don’t see any frustration,” Weiskopf told Golfweek. “Life is good, and it should be — he’s a multi-millionaire and has a kid now — but I don’t see the Tiger attitude. It’s like he’s satisfied all the time.”

Weiskopf conceded that McIlroy is more physically gifted than Johnson, but the intangibles just aren’t there. “I know Rory works out,” Weiskopf said, “but I bet if you watched them both work out, Rory would be a lot of laughs and giggles and Dustin would be b-lls to the wall and forcing a little bit more on himself and that’s what he’s done.”

But that’s also the beauty of McIlroy’s character. He freely admits he doesn’t feel defined by wins and losses. He cares about more than just the game. Filling trophy cases might be the goal for some, but for McIlroy it’s not the only priority in his life.

“Sometimes, I’ve had that in the past where I see myself as the golfer, and basically the only thing that matters is what I shoot that day,” McIlroy said after winning the Players Championship last year. “That’s not me. That’s where perspective is huge. If I go out one day and shoot 74, who cares. I’ll go back the next day and try again. Perspective has been a big thing for me.”

That self-awareness is a gift and a curse for McIlroy, but it’s also what makes him so intriguing. So don’t expect Weiskopf’s observations to irk McIlroy. In his eyes, there is more to life than golf — and that’s ok.