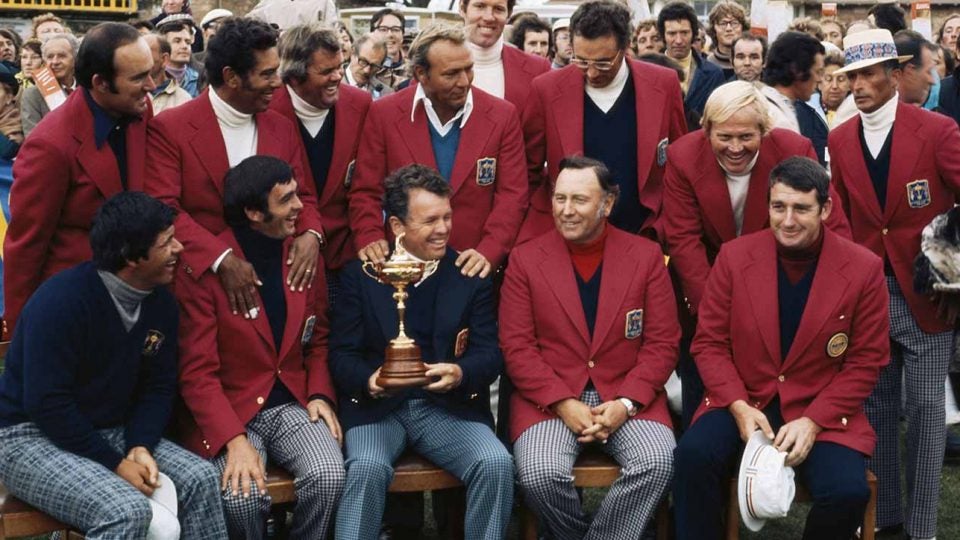 Tom Weiskopf and Jack Nicklaus were teammates in the U.S.'s 1973 Ryder Cup victory.

My first Ryder Cup was 1973, at Muirfield, after I had won the British Open that year, and I remember we had a meeting following the first day of play. I’d lost my first two matches. Jack says to our captain, Jackie Burke, “Put me with Tom tomorrow. He needs a win!”

We were playing alternate shot against Brian Barnes and Peter Butler. I asked Jack on the first tee which holes he wanted to tee off on, odd or even. He said, “It doesn’t make any difference—you pick it. I don’t care.”

Come into the 16th, a par 3, we were all square despite playing so much better than them. I played a middle iron into the green to about 18 feet. They missed their tee shot way left, into knee-high grass. Whoever it was for them to play the second shot took a big old swing. It looked like a sickle cutting hay. Out came the ball—it barely cleared the bunker, kept rolling and stopped about two inches short of the hole for a conceded par. I’m killing time with the caddies when Jack calls me over.

I said, “I think it’s about a half a ball in and a half ball out on the left-hand side.”

He says, “That’s exactly what I thought.”

Instruction
Jack Nicklaus: Why this is ‘obviously’ the most important part of the golf swing

Jack always marked his ball on the green “clean”—no writing on the top, all of it on the side. I can still see that ball rolling. It looked like a spoke it was rolling so perfectly. The ball disappeared into the hole…and spun back out on the left side. He was motionless, still crouched in his putting posture, when I went over and patted him on the shoulder. I told him, “I can’t believe that putt didn’t drop.”

That’s the way he thought. Then he gets up to the tee on 17. He has this look on his face, he was so determined. He hit the ball so hard, bombed it over these dangerous bunkers, and he turns to me and says, “Put it on the green—I won’t miss the next one.” We won that hole, and eventually won 1 up.