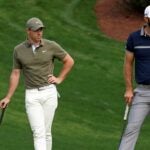 Rory McIlroy was impressed with Dustin Johnson on Friday at the Masters.

Dustin Johnson’s calm on the course is aspirational. No matter where his game is at, he appears to be in a state of zen. In a game that demands supreme control over your emotions, this quality is among his most valuable attributes.

It’s something that’s been harped on before, but that calm still impresses no matter the situation. Maybe it’s scar tissue from all the heartbreak he’s had in the past. From a rules fiasco at the PGA, to a Sunday meltdown at the U.S. Open, he’s has had plenty of moments that would send mere mortals into a career spiral. Johnson doesn’t even seem to remember them.

This week at the Masters has been more of the same. For a moment on Friday, it looked like he was preparing to run away and hide from the rest of the field. He cooled considerably coming down the stretch and is only nine under, but his demeanor never changed from the heater to the struggles.

Rory McIlroy got a front-row seat for the DJ show over two rounds. He bested Johnson in the second round, but still was singing praises for his playing partner after the round. And he made Johnson’s game seem quite simple.

“(He’s been playing) great, same as he’s been playing the last few months,” McIlroy said. “See ball, hit ball, see putt, hole putt, go to the next … (He) makes it look so simple at times.”

There are few higher compliments in golf than being told your game is simple. There are plenty of ways to mess things up, so the simpler, the better. The mental edge Johnson carries was another point of emphasis for McIlroy.

“I think he’s got one of the best attitudes towards the game of golf in the history of the game,” McIlroy said. “I don’t know if I can compare him to anyone else, but the way he approaches the game is awesome.”