Rory McIlroy gives the most sincere take on his entire life 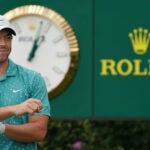 Rory McIlroy’s won four major championships. He’s won 27 times across the PGA and European Tours. He’s won over $50 million. He has an opportunity to win another $15 million at this weekend’s Tour Championship. Early Monday afternoon, his wife, Erica, gave birth to the couple’s first child, a girl, Poppy Kennedy.

“You know, I sometimes think, everything that’s happened to me on the golf course and off the golf course has already been beyond my wildest dreams, and sometimes I have to sort of pinch myself and sort of ask, ‘Why me? Why am I so lucky?’” McIlroy said Thursday.

On Saturday, after the third round of the BMW Championship, McIlroy said he and Erica were expecting “very soon.” He had entered the day tied for the lead, but said his caddie, Harry Diamond, had a phone with him and McIlroy was prepared either to leave last week or this week should he get word. “I’m going to play in many more Tour Championships, and it’s only going to be the birth of your first child once,” McIlroy said Saturday. “That trumps anything else.”

Poppy was born at 12:15 p.m. Monday at Jupiter Medical Center in Florida. McIlroy’s flight to Atlanta on Thursday was scheduled to leave at 8 a.m. He left his home at 8 a.m.

But at the end of the day, life doesn’t stop. Life moves on. And as I said, I know that Erica is surrounded by her family, and my mom and dad are just around the corner, so she’s got all the help she needs, so I felt a little more comfortable being able to go.”

He believes he’ll be more comfortable on the course, too.

Since the PGA Tour restarted in mid-June, McIlroy has not missed a cut, but he has also not finished in the top 10. At the Northern Trust two weeks ago, he admitted that “I feel like the last few weeks, I’ve just been going through the motions. I want to get an intensity and some sort of fire, but I just haven’t been able to. And look, that’s partly to do with the atmosphere and partly to do with how I’m playing. I’m not inspiring myself, and I’m trying to get inspiration from outside sources to get something going.”

“I think if you look at fathers in all different sports, golf, tennis, it’s not a new lease of life, but it’s a different perspective,” McIlroy said. “The trials and tribulations of what goes on out on the golf course don’t really seem to matter that much, so you can sort of let it just slide off you a little bit more and not be as reactive to your mistakes and know that this is – it’s important and it’s your career, but at the end of the day, you get to go home to your family, which is the most important thing.”