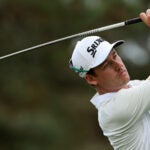 Andrew Putnam hits his tee shot on the 3rd hole at Augusta National during the second round of the Masters.

Andrew Putnam, playing in his first Masters earlier this month, missed the cut by a stroke. He shot one-over 73 and even-par 72.

He was a swing away from missing those rounds, too.

On Tuesday at Augusta National Golf Club, Putnam hurt his back. As late as his drive down Magnolia Lane a couple of hours before his Thursday tee time, the 31-year-old pro was considering withdrawing.

On both Wednesday and Thursday morning of Masters week, Putnam thought he’d be watching on TV again.

Putnam played nine-hole practice rounds at Augusta on Sunday, Monday and Tuesday. He said he “tweaked” his back during a cool down on Tuesday afternoon. “It felt sore but nothing crazy,” he said.

“Woke up Wednesday and could hardly walk,” he said.

Putnam didn’t practice Wednesday. He stayed in. Thursday morning, his back got worse.

“It took me a few hours just to get out of bed and stand up,” he wrote. “After a lot of prayer, anti inflammatories and anything i could do to loosen it up i was ready to WD cause i couldn’t bend over.”

At the least, Putnam said, he would try to hit one ball at Augusta.

Then it rained. Then his already late tee time – he was last off the 10th hole – was pushed back a few hours. Then he bought a back brace at a Walgreen’s. Then he took his swing.

And then, as the Masters, miracles or both can sometimes do to a person, he played.

“To my surprise i could just manage to make contact with the ball and was determined to tee it up no matter what the outcome!” he wrote. “So although it hurt to miss the cut by 1 i walk away just thankful to of been able to compete and allow my parents to walk around Augusta for two days and watch their son play his first Masters!”