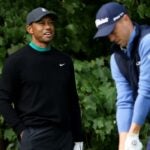 Tiger Woods will go off in the early-late wave.

Woods is set to begin the championship at 8:07 a.m. local time Thursday morning, meaning unless you are on the East Coast, it could be an up-before-the-sun type of day if you hope to get a glimpse of his opening tee shot. He’s paired with fellow all-world ball strikers Collin Morikawa and Justin Thomas for the first two days, and the trio will go off on No. 1 for the opening round.

With an early-late draw, Woods will have plenty of time to rest and recover before the second round as the grouping is scheduled to go off No. 10 at 1:27 p.m on Friday. That extra recovery time could be a huge advantage for the 15-time major winner, especially considering the kind of brutish conditions that are expected at Winged Foot this week. The extended time off between rounds could play a pivotal role if his aging body feels any ill effects after Round 1.

Although Woods won the Masters just 17 months ago, the time since then has been uneven at best. Woods added another win at the inaugural Zozo Championship last fall and looked sharp in a Presidents Cup win, but he’s also fallen out of contention before the weekend more than he’d have liked. Since Zozo, he has just one top 25 (T9 at Torrey Pines in January) as his trusty Scotty has not been as dialed in as is customary.

In his most recent major appearance at the PGA Championship, Woods managed to make the cut, but putting woes plagued him throughout as he settled for a T37 finish. He’s teed it up twice since then, though the results were much the same as he never gathered any momentum and was much of an afterthought on the leaderboard.

Tee times for the entire field are listed below.