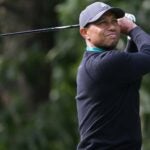 Tiger Woods will look to capture his fourth U.S. Open title this week.

Tiger Woods heads to the U.S. Open not having won the championship since 2008, but that doesn’t mean he’s not among the favorites — for the fans at least. While Woods is always a fan favorite, he’s not a favorite of Vegas this week as he holds 50/1 odds to win according to golfodds.com, well behind Dustin Johnson who leads the way at 8/1.

If those odds sound a little low for a player of Woods’ stature, you’re not wrong. His 50/1 odds are the same as Paul Casey and worse than the likes of Daniel Berger (30/1) and Tyrrell Hatton (40/1). But the lackluster odds for Woods are not unfounded.

Woods comes into the event after a solid, yet not quite spectacular, 2019-20 season. He made the cut in all seven events he played, even registering a win at the Zozo Championship last fall, but outside of that win, he was quite pedestrian. A T9 finish in January at Torrey Pines represents his only other top-25 finish on the season.

In all four of his starts since golf’s return, Woods played well enough to make the weekend, but not quite well enough to make any noise as he’s finished outside the top 35 in every event. Despite the so-so play and relative lack of tune-up events on his resume this year, it wouldn’t be unheard of for Woods to win this week. He followed a similar progression heading into the Masters last spring.

“When I won the Masters last year, I was not feeling particularly well prior to that,” Woods said in his pre-tournament presser. “Then all of a sudden I put myself in contention … come Sunday, I put all the pieces together.”

If we’ve learned anything over the years, it’s to never count him out of it. Woods tees off at 8:07 a.m. local time Thursday as he looks to win the U.S. Open for the fourth time.