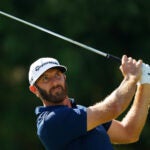 Dustin Johnson hits a shot during the Tour Championship on Monday.

Dustin Johnson won the Tour Championship on Monday. He won the Northern Trust three weeks ago. He lost in a playoff at the BMW Championship two weeks ago and tied for second at the PGA Championship in early August. He’s the favorite to win the U.S. Open next week. Johnson’s looking unbeatable.

Johnson looked only beaten toward the end of July.

“The thing about DJ is you never know,” Justin Thomas said after Monday’s final round of the Tour Championship. “I give him hats off. I don’t know if he’ll talk about it, but I played with him at the Memorial, and I’ve never seen him as lost, anywhere remotely close to that lost. He was grinding his a– off. He was putting so bad and playing so bad.

“But he never gave up. He wasn’t quitting. He was just trying to find it out there, and he couldn’t find it again the next week, and then next thing you know, what, two months later, he’s the FedExCup champion and running away. I think that’s all you need to know about golf right there.”

It’s all you need to know about Johnson, too.

He said he rested and got treatment at home for four days after the 3M Open. He said he worked on just a few things. He jumped back on the plane and headed to Memphis for the World Golf Championships-FedEx St. Jude Invitational.

Johnson broke 70 all four rounds and tied for 12th.

He had looked only beaten.

“It wasn’t hard at all,” Johnson said Sunday of his ability to move on after the Memorial and the 3M. “I mean, I don’t know about you, but I hit bad shots all the time. They were just a little – everything was compounded a little bit. I don’t know. I just wasn’t swinging very good. My mind wasn’t in it. Yeah, it was just a lot of bad. But it’s real easy to forget. All it takes is a couple good shots, and it’s gone.”

Said Thomas on Monday: “He’s been out here for a while. He knows having a short memory is good out here.”

“Obviously I’m playing very well now,” Johnson said Monday. “Like I said, I feel like I can play better, though. You know, at times I’m firing on all cylinders, but there’s times where I’m not. I’m playing good enough, though, to where I can keep it where I still can give myself a chance to win.”

U.S. Open 2020: Here's how much money every player made at Winged Foot