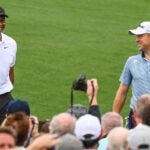 Tiger Woods and Justin Thomas played multiple practice rounds together at the 2022 Masters.

Tiger Woods put together another gutsy performance this week at the PGA Championship to make his second straight major cut following his return from a devastating car crash last February. Although a win wasn’t in the cards, as Tiger was forced to withdraw after Round 3 when his injuries started acting up.

Though we didn’t get to see Tiger on Sunday at Southern Hills, it wasn’t all bad news for the 15-time major champ. The player who is perhaps his best friend on Tour did pull off a win, and an epic one at that.

Justin Thomas fought through bad weather conditions over the first two rounds to get into contention at this 104th PGA Championship. Then in Sunday’s final round, Thomas overcame an enormous seven-stroke deficit with a three-under 67 to force a playoff, where he bested Will Zalatoris for his second-career PGA win.

Thomas and Tiger have grown close over the years, regularly playing together at home in Jupiter, Fla., most often at the Medalist, or hanging at Tiger’s Jupiter Island mansion. Even Tiger’s son and burgeoning golfer, Charlie, has gotten close with JT. The two took their on-course trash talk to live TV at the last two PNC Championships, where Tiger and Charlie played alongside JT and his dad and PGA professional, Mike Thomas.

In early April of this year, Tiger, Justin and Charlie flew to Augusta National to get in an early Masters practice round together, fueling speculation about Tiger’s imminent return.

Given their history, it’s only natural that Tiger wanted to congratulate his buddy on a historic major win in a public forum, and on Sunday night he did just that.

Not long after Thomas tapped in his winning par putt in the playoff, Woods took to Twitter to give him his due.

“Big congrats to @JustinThomas34! He kept himself in this championship until the very end and once he got his shot he didn’t look back. Thanks to Tulsa and the @PGAChampionship for a great week.”

Tiger and JT have shown that they share a lot in common, and now they both have a replica Wanamaker trophy from Southern Hills sparkling in their Florida houses. But JT will have to put together two more magical PGA weeks to match Tiger’s trophy-case quartet.