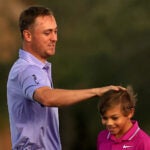 Justin Thomas messes up Charlie Woods' hair on the 18th green on Saturday.

Saturday’s first round of the PNC Championship, otherwise known as Charlie’s television debut, was over. Charlie hit nice shots. Charlie was funny. Team Woods shot a 10-under 62 at the golf pro-family member scramble event at the Ritz-Carlton Golf Club, as did Team Thomas. Three times Charlie’s drives were even so nice, dad didn’t bother. He didn’t on the 13th. There, Charlie, from forward tees, hit his drive just short of the green, saw Justin drop his tee shot in the bunker, then promptly left him a needling note in the sand that said: “Draw hole,” leading to Mike’s playful comment.

Shortly after the fistbumps, hair scratching and ribbing, the foursome walked off to the scoring tent. Tiger was out in front, followed by Mike, then Charlie. Then Justin, who lifted his friend up from behind and carried him for a couple seconds. Charlie let out that “oh, ho, ho” laugh that only kids can create.

“You have fun, dude?” Justin asked.

“Good playing, man,” Justin said after he put him down and slapped him on the backside.

As dad answered reporters’ questions, son hit balls on the practice range. “Trying to make sure that Charlie has the right environment, he’s sheltered and he’s away from all of this, what I have to do, making sure I do all of it, so that he can practice and play and enjoy the golf side of it” Woods said. And practice and play he did.

In a video shot by the PGA Tour, Justin is standing with his legs spread and his back to Charlie as he’s watching his dad on the range. Charlie pitches a ball you know where. Justin turns around and makes a quick comment before Charlie resumes his practice for Sunday’s second and final round.

“Making sure he had fun, and I think he did,” Tiger said. “He enjoyed being out there, and the fact that we got out to such a quick start helped. Him hitting some of those incredible shots, carrying from the range to the golf course, that’s what we talked about.”