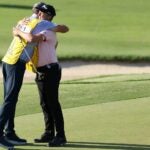 Justin Thomas and Bones won their first major together on Sunday.

Justin Thomas was agitated. Check that, he was steaming. Maybe you saw the video on Golf Channel or CBS. But it was Saturday night and Thomas had just shot 74 in the third round of the PGA Championship. He was seven shots off the lead and fuming on the Southern Hills range, trying to figure out how to get his game back on track before nightfall, so he wound’t have to wait until the morning for answers.

That’s when his caddie, Jim “Bones” Mackay, had had enough.

“I’m fully confident in saying that I wouldn’t be standing here if he didn’t give me that, wasn’t necessarily a speech, but a talk, if you will,” Thomas said on Sunday night, about an hour after he beat Will Zalatoris to win the PGA Championship and claim his second major title. “I just needed to let some steam out. I didn’t need to bring my frustration and anger home with me. I didn’t need to leave the golf course in a negative frame of mind.”

Perhaps Thomas had reason to be frustrated. He’s been one of the best players in the world for a shade under the last decade but still had won just one major, and it was back in 2017. Entering this week, he’s had five other major top 10s that weren’t wins and seven top 10s in 12 starts this season, which is reason for optimism or frustration, depending on your demeanor. Thomas was fed up. Three bogeys in his last six holes Saturday didn’t help.

“I felt like I’d played terrible,” Thomas said. “And [Bones] was just like, ‘Dude, you’ve got to be stop being so hard on yourself. You’re in contention every single week we’re playing. I’ve had a lot of chances to win tournaments, and it’s a hard golf course; it’s a major championship. You don’t have to be perfect. Just don’t be hard on yourself. Just kind of let stuff happen, and everything is trending in the right direction. So just keep staying positive so that good stuff can happen.’ I left here in an awesome frame of mind.”

Thomas wasn’t supposed to win on Sunday; I mean, are you ever supposed to win when you start the day seven shots off the lead? But he made three birdies in a four-hole stretch around the turn and added one more clutch birdie on 17 to get to five under. His 67 tied the low round of the day and was good enough for a playoff with Zalatoris, which Thomas won by finishing the three-hole aggregate two under to Zalatoris’ one under.

Bones raved about that bunker shot Thomas hit on 17, which set up his final birdie in regulation. He almost always uses a 60-degree wedge from the bunker, but in this instance he used a 56 and stuck it to kick-in range. That was the moment when it hit most of the golf-watching public: Justin Thomas could really win this golf tournament.

Bones got another major on Sunday, too — his first with Thomas and his first without Phil Mickelson. Bones and Mickelson were one of golf’s most famous player-caddie duos, but they split in 2017 after 25 years and five majors. Bones went into broadcasting but only left to pick up Thomas’ bag this season.

“If I was ever going to caddie again this was the time and this without question was the player,” Bones told reporters on Sunday night at Southern Hills. “My wife will tell you the person from the get go I said I would leave for if the opportunity arose was Justin Thomas. And it worked out luckily for me.”

Thomas won the WGC-FedEx St. Jude Invitational in 2020 with Bones as a fill-in caddie, when his regular looper, Jimmy Johnson, was out. They decided to join forces full-time this season and beyond.

But why did Bones really decide to join Thomas? It wasn’t just his talent or personality. Sure they are friends, but it wasn’t because they are best buds. It wasn’t for money.

Bones essentially explained the reason, indirectly, with a story. It happened at the Riviera pro-am. One of the guys in the group told Thomas he liked to collect Ferraris. He said another liked to collect wine.

“What are you into?” he asked Thomas, as Bones recalls. “And Justin thought about it for a second and said, ‘I just want to win tournaments.'”